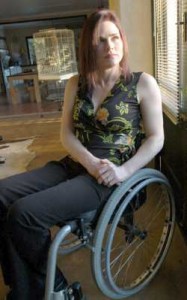 Wheelchair-bound Justine Asher forked out R120 000 on what she believed was a “miracle” stem-cell cure that would allow her to walk again – only to learn that it had not been scientifically tested.

The couple have been accused of distributing untested stem-cell treatment drugs “without any basis in science”.

Van Rooyen and Brown were the focus of a manhunt by the FBI and Interpol and face a 51-count indictment handed down by a federal grand jury in Atlanta in March.

After their US-based company, Biomark, was shut down, the couple set up shop again under the name, Advanced Cell Therapeutics (ACT).

“I was devastated when I heard (about the couple being in trouble with the law). I phoned my husband and I was in tears,” said Asher on Sunday.

Asher, a former model, was paralysed at the age of 18 in a car accident. She has an incomplete spinal injury, which means her spinal cord is intact. She still feels sensation down to her toes, but does not have controlled movement.

Until a week ago, Asher believed she could regain the use of her legs, but her hopes were dashed when a state prosecutor informed her that ACT was under investigation.

Asher was treated in ACT’s Rotterdam clinic – one of 12 across the world – on November 30, after going on a strict organic diet in preparation for the procedure.

Stem cells were fed into her body intravenously for more than three hours, after which she was instructed to continue the organic diet and start on a course of vitamins.

“They said it would take nine to 12 months before they would achieve full potential. At six months I thought I could see results, but I’m not sure if it was because I was on an intense physio programme. The whole time I was under the impression that things would get better … that was my long-term hope. Because that’s what they promised me,” she said.

Asher said she had spent about R120 000 on the treatment. ACT charged R80 000 for the procedure, while the rest was spent on travel and accommodation.

Asher has now had to undergo testing for blood diseases.

“Fortunately I don’t have anything. But I still don’t know what was put in my body. When you’re living in my condition, you keep hoping science and technology will catch up and someone will find a cure. I do believe (stem-cell growth) has the potential to be a cure.”