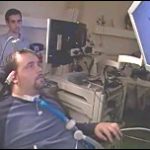 With a tiny electronic chip implanted in the Motor cortex of his brain, a 25-year-old man paralyzed from the neck down for five years has learned to use his thoughts to operate a computer, turn on a TV set, open email, play a video game and manipulate a robotic arm.

Two other patients with the implanted brain chips — one at the Rehabilitation Institute of Chicago — have advanced their brain-computer interface skills even further, although all movements are still rudimentary. One, a Massachusetts quadriplegic, unable to speak as a result of a stroke that destroyed her Brain stem, uses her thoughts to type messages using specialized software.

Their mind-over-matter movements have become so nimble that if the two patients were able to speak, they could carry out their computer functions while talking at the same time, much as a normal person interacts with computers and people, according to the lead article in Wednesday’s issue of the British scientific journal Nature.

“This is a proof of concept that you can get signals out of the brain that can provide useful controls,” said senior author John Donoghue, director of Brown University’s Brain Science Program. “I see this as opening the door to a whole new kind of neurotechnology that will provide new opportunities for those who have paralysis or other movement disorders.”

So far, four patients have been implanted with the brain chip. Three were paralyzed from spinal cord injury or brain stem stroke, and one has amyotrophic lateral sclerosis, better known as ALS or Lou Gehrig’s disease. The FDA has authorized the recruitment of two more spinal cord injury patients and four more ALS patients.

The chip that’s implanted in their brains is about the size of a baby aspirin. It has 100 electrodes, each thinner than a human hair, that pick up the electronic chatter from between 30 to 60 neurons in the motor cortex, which normally controls arm movement.

The device, called the BrainGate Neural Interface System, is produced by Cyberkinetics of Foxborough, Mass., which was originally established by Donoghue and others.

The patient imagines moving his arm to activate the neurons. The chip registers this activity, which is then converted into a program for controlling a computer cursor, TV, e-mail and other devices, and patients quickly learn how to adjust their thought processes to control the different systems. It only takes minutes, for example, for a patient to imagine moving his arm to track a moving cursor on a computer screen, and then to be able to move the cursor with his own thoughts.

Experiments with monkeys showed that the brain cells interacting with the chip become stronger with use, said University of Chicago neuroscientist Nicholas Hatsopoulos, who participated in the development of BrainGate while at Brown and is a cofounder of Cyberkinetics.

“Animal studies show that the motor cortex does adapt as the animal learns something new,” he said. “It’s like learning to use a tennis racket until it becomes an Extension of your own arm.”

Will normally healthy people ever be able to use a brain chip to enhance their memory, strength, vision or other functions? Hatsopoulos says that’s more science fiction right now and would raise ethical issues because the procedure involves surgery to implant the device on the brain.

“But imagine a memory chip containing the Encyclopedia Britannica that would interact with your brain and you could access it. That’s totally far out,” he said.

The first brain-computer interface experiment in humans was conducted with limited results in 2000 by Philip Kennedy of Georgia State University. Only one or two electrodes were used in a paralyzed female patient. They picked up activity from a similar number of individual neurons.

By detecting the activity of many neurons at the same time, the Brown University device is more adapt at detecting normal brain talk and converting it into more sophisticated controls.

Although the results of the study are preliminary and more research needs to be conducted, they are promising, neuroscientist Stephen H. Scott of Queen’s University, Kingston, Ontario, wrote in a News and Views article in the same Nature issue. “This research suggests that implanted prosthetics are a viable approach for assisting severely impaired individuals to communicate and interact with the Environment.”

While some scientists believed the motor cortex would lose function from disuse after years of paralysis, Scott said the Brown experiment showed for the first time that these neurons were still viable.

Nevertheless, the research team still faces daunting problems of equipment reliability. The first patient, Matthew Nagle, a Massachusetts man whose spinal cord was severed by a neck stab wound in 2001, received the first brain implant in 2004. The device worked for about a year but then began to fail, and it was removed.

“This [BrainGate] is a start, showing efficacy in a human, but still far from being a useful device that actually increases the quality of life for this patient,” said Andrew Schwartz, a University of Pittsburgh neuroscientist who was not involved in the study but who conducts research on brain-computer interactions.

Donoghue said a new generation of technology is under development that would get rid of bulky equipment and wiring attached to a patient’s head. They would be replaced by a wireless communication system that would be more suitable for operating things like computers, TVs and wheelchairs, he said.

When Nagle’s implant was working at its peak, he was dazzled, swearing out loud the first time he moved a robotic arm with his mind.

“A lot of individuals feel that they’re stuck in this state where they can’t move their arms and legs,” Donoghue said. “He had talked about how he had no hope before he experienced this technology and how it gave him hope.”

“They see that they’re doing something that allows them to interact with the world again,” he said. “There’s quite a bit of excitement about that.”

Dr. David Chen, director of the Rehabilitation Institute of Chicago’s spinal cord injury program, said RIC decided to participate in the BrainGate research because of its promise of near-term benefits.

“We’re quite a ways away from developing treatments to repair spinal cord injuries,” he said. “This is one of those technologies that we felt has the potential to have a much more immediate application in terms of how it may impact on a person’s life.”

Donoghue, whose research is funded by the National Institute of Neurological Disorders and Stroke and Cyberkinetics, said the next step is to get paralyzed people to use their muscles again, perhaps even walk, by bypassing their spinal cords.

A collaborative effort is under way to link BrainGate with an electronic muscle stimulator developed at Case Western University in Cleveland, he said. This research is partly funded by the National Center for Medical Rehabilitation Research.

The smile his parents could not live without