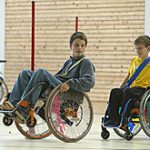 It follows extensive research into spinal cord Regeneration at the universities of Zurich and Fribourg, a report on which was published this week in Nature Medicine.

The scientists’ findings, and the launch of the first trials in humans together represent an important step towards helping paraplegics rediscover their mobility.

“We have reached an important milestone in a very long process,” Eric Rouiller, professor of physiology at Fribourg University told swissinfo.

In their six-year programme, researchers partially severed the spinal cords of 12 monkeys leading to paralysis in one hand.

The monkeys were then treated with an Antibody – known as anti-Nogo – that allowed nerves to re-grow up to 12 millimetres and enabled monkeys to regain 80 per cent of their movement.

Armed with these conclusions and encouraging pre-clinical findings, Novartis has now initiated the first phase of clinical trials in humans, in collaboration with the Spinal Cord Injury Centre at Zurich University and other European and American spinal injury centres.

The trials are designed for individuals who have suffered a serious accident in the ten days prior to treatment, rather than long-term paraplegics.

The initial feasibility phase involves installing a small pump in about 15 patients to inject the anti-Nogo antibody into the spinal column.

Novartis says that if all goes well, the next stage should start in spring 2007, investigating the safety and the effectiveness of this therapeutic approach on around 100 patients.
Caution

Despite their general optimism, researchers remain cautious about the success of the trials.

Rouiller stresses their long-term aspect and is keen that patients’ hopes are not raised unduly.

“You have to remember that clinical trials are the most difficult stage and can reserve some unpleasant surprises,” he added.

Martin Schwab, chairman of Zurich’s Neuroscience Centre and a leading Swiss neurobiologist, compares a spinal injury to a bomb going off in a computer room.

“It is not surprising, therefore, if new nerve connections do not grow back correctly,” he says.

But Rouiller is convinced that his monkey tests are extremely representative of situations where the spinal column is not totally destroyed.

Experimentally, researchers are now suggesting that a better outcome is possible for people with spinal cord injuries.

The realistic hope, according to Schwab, is that Paraplegic patients will get some movement back – probably with crutches or handrails – as well as restored bladder control.

Scientists believe that regaining mobility involves a multi-therapy approach, involving a Nogo blocker, an agent to boost nerve growth, and some kind of cell transplant for treatment of severe paralysis.

Whatever happens, Schwab is delighted to see a proliferation of research projects into paralysis treatment: “Even if our approach doesn’t lead to a therapy, another will follow close on its heels.”

In 1988, Martin Schwab first identified a substance in the Central Nervous System that prevents the brain and spinal cord from repairing themselves after an injury.

Dubbed Nogo because of its inhibiting effect, the gene produces a protein, which prevents damaged nerves from re-growing after they are cut.

His team developed an antibody that neutralises the blocking protein and allows the nerves to reconnect.

Researchers carried out the first tests on rats, which were paralysed by having their spinal cords partially cut; they were then given the antibody. The nerves re-grew and the animals resumed normal activities.

Eric Rouiller and his team continued tests on 12 macaque monkeys, which have similar corticospinal tracts to humans.

After their spinal cords had been partially cut and treated with the antibody, the partially paralysed animals regained 80 per cent of their hand movements.
KEY FACTS

* In Switzerland 2,200 people have spinal cord injuries.
* About 180 new paraplegics are registered every year, 50% with severe injuries.
* The two most common areas of the spinal cord most injured are the Cervical spine and the Lumbar spine.