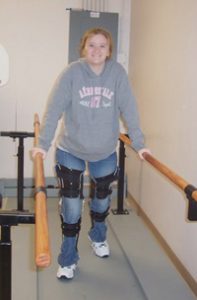 WAVERLY, Ill. (BP)–Jacki Rabon was riding with some friends in the back of an SUV in August 2003 when she was thrown out of the vehicle as it veered off the road. She skidded a few feet and landed near a ditch, and her life was suddenly changed.

“Right away, I knew I couldn’t feel my legs because I couldn’t get up,” Rabon, 18, told Baptist Press. “I went to sit up and then my back hurt too bad to sit up, so I knew something was wrong.”

She was rushed to one hospital and then another, where she underwent emergency surgery to repair the damage. Her mother had to break the news to Rabon that she was paralyzed.

“I knew there was a possibility before I had surgery, but I asked her after surgery if the doctor fixed it, and that’s when she told me that he fixed my back but I still was paralyzed,” she said.

“My mom said I didn’t talk for a long, long time. I just stared at the walls and I cried a lot. I think what was going through my head was that I would always need help and not be able to do hardly anything and that pretty much my life was over.”

But about a year later, Rabon’s pastor at First Baptist Church in Waverly, Ill., called the family to tell them he had just watched a special on PBS about a cutting-edge surgery that involved harvesting stem cells from a patient’s nose and transplanting them into the site of a spinal cord break.

The procedure was not available in the United States, but at the time at least six Americans had traveled abroad to have Carlos Lima, a neurologist at Hospital Egaz Moniz in Lisbon, Portugal, perform the surgery in hopes of regaining at least some movement.

“At first I wasn’t sure if I wanted to have the surgery or not, and then I figured that I needed to because if I never tried then I never would have known what would have happened,” Rabon said.

After a series of tests, Rabon learned that she qualified as a candidate for the surgery, which would cost $47,000. Members of her church and community began an intense fundraising effort that eventually yielded the funds for Rabon and her mother to travel to Portugal for the surgery last October.

When Rabon returned home, she went to Detroit for Rehabilitation training within two weeks.

“The first day there, I was crawling, and then a couple of days later they had me up on braces walking,” she said. “They did a lot with me there, and after the two and a half weeks, I kind of learned what I needed to be doing at home, so we went back home.”

Rabon has a couple of machines at home that help her stand and exercise her leg muscles, but a friend from church built a set of parallel bars for her to use. They’re set up at the church, and she goes there nearly every day to practice walking.

She reached a milestone March 27.

Her goal is to walk on crutches by the end of the year, and she appears to be well on her way. Beyond that, Rabon said, she hopes someday to walk at her wedding.

One of the hardest parts of her ordeal has been relearning everything she already knew about walking. Learning to balance herself is one of the largest issues, she said, but God has taught her some invaluable lessons through all of the difficulty.

“At first, after the accident, I kind of lost my faith for a little while because it was hard to imagine why God would have done this to me. Mom said the same – she had a hard time going to church after that and listening to the preacher because she was so upset and didn’t understand,” Rabon said. “But after a while of being like this, especially when I got to have the surgery after all the prayers and the money was raised, I think my faith is stronger now than it has ever been.”

Her mother has taught her to rely on Philippians 4:13, “I can do everything through Christ who strengthens me.”

“I know what’s more important in life now and how not to take things for granted,” Rabon said. “I’ve said before that I think God chose me out of the ones in the accident [to be paralyzed] because I’m the one that had the power and the faith to get through it, and I don’t think He chose the rest of them because He knew that I was the one that maybe had more faith and had more determination to get through it.”

Rabon’s story serves as a tangible example of the medical progress that is being made through adult stem cell research. The procedure Rabon had in Portugal is called olfactory mucosa transplantation and involves removing cells from the nerve that transmits the sense of smell to the brain.

Olfactory tissue covers about one inch of the upper nasal cavity and contains many cells with regenerative potential.

The tissue can diminish over time, so the younger the patient, the better, experts say. Olfactory tissue is removed from the patient’s nasal cavity, prepared and then implanted into the spinal cord injury site. The transplanted cells then regenerate efficiently and transform into nerve cells that help repair the spinal cord, and the cells serve as alternatives to using embryonic stem cells for the same purpose.

Lima, the doctor, has said much follow-up work is needed to document long-term benefits and possible delayed side effects of the procedure, but even the smallest amount of restored function can have profound quality-of-life benefits for paralysis patients, he said. Doctors are awaiting approval from the Food and Drug Administration to perform the surgery in the United States, and Rabon said she hopes that day comes soon.

“I’m still really against abortion, so I’m not for embryonic stem cell therapy. But anything else that doesn’t involve killing a baby is great,” she said. “I think they should do [olfactory transplantation] in the States because it’s just from my own body.”

Stem cells are the body’s master cells that can develop into other cells and tissues, building hope of treatments for numerous afflictions. They may be found in such non-embryonic sources as bone marrow, umbilical cord blood, fat and placentas. The procurement of stem cells from such sources does not harm the donor.

Embryonic stem cell research is a controversial topic, but proponents are unable to point to someone who has benefited from the research. Meanwhile, lupus, Multiple Sclerosis, heart disease, Crohn’s disease and diabetes are among the ailments that have been successfully treated with non-embryonic stem cells.

Rabon believes there is much hope in adult stem cell research, and she is sure that once the word gets out, more and more people will want to have adult stem cell therapy. So far, she can testify that it has improved her life, and no other lives were harmed in the process.