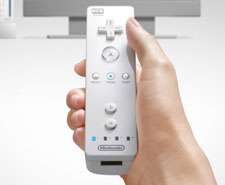 Nintendo has been in the technology spotlight since announcing plans for a video-game controller that can be used with only one hand.

But a disabled fan in Southern California took notice for more reasons than just the excitement about the next generation of interactive entertainment.

To Travis Taft, 19, the controller was a stunning godsend in his fight against an injury that left him a quadriplegic. He has tried to call national attention to the unintended benefits that the gadget will offer for people with a variety of physical disabilities.

Like many people with spinal-cord injuries that affect all four limbs, Taft retains some use of his arms and hands. But it’s not enough for effectively operating the typical two-hand game device. He’s confident his relatively strong right hand will be able to manipulate the new controller, which is part of the Revolution game system that’s still under development by Nintendo.

“Video games have been a major factor in my life,” said Taft, who has resolved to take the most optimistic approach possible to his Rehabilitation. “I was eagerly hunting for some way to get back into it.”

Marcie Roth, chief executive officer of the National Spinal Cord Injury Association, said Taft fits into a large category of injured people in their teens to 30s whose overall health is closely connected to resuming activities they love.

“Being able to restore normalcy is all the difference in the world in terms of the rest of their outcomes,” Roth said. “People who believe they can do the things that were pleasurable to them before the injury are people who are going to seek positive outcomes in other ventures as well.”

Nintendo is expected to make the Revolution game system and one-hand controller available late this year. Part of the marketing strategy is to make video games seem less intimidating to casual or novice players by having the controller feel more like the remote controls for TV sets and other common electronic appliances.

But Taft, who was injured while body surfing two days after arriving home from his freshman year at college, also tried to point out the controller’s breakthrough value for the disabled by writing a letter published in Electronic Gaming Monthly magazine.

Taft, who lives in Pacific Palisades, has struggled to satisfy his game cravings while he waits for the Revolution’s new controller. His efforts include using a childhood game system that can be played by moving a joystick with his right hand and slamming his more rigid left hand into one button.

Nintendo was focused on innovative game design when it decided on a one-hand controller. But Beth Llewelyn, senior director of public relations, said the Mercury News inquiries about Taft’s reaction are “something we’re looking into now.”

By coincidence, Nintendo games also became a key ingredient in a recently developed exercise machine that was engineered for people who are either in wheelchairs or can’t exercise with their legs.

The GameCycle, created by Three Rivers Holdings in Arizona, is an upper-body exerciser — basically, an arm cycle that lets the user control racing games through the exertion of turning handgrips.

The concept was worked up by the Human Engineering Research Laboratories in Pittsburgh, but with a monitor for playing computer games. Three Rivers wanted “exercise to be as addictive as gaming,” noted company president Ron Boninger, so it licensed the Nintendo GameCube system as a substitute for the PC hookup.

The GameCycle (www.3rivers.com/gamecycle.php) costs $5,000 and so far has been purchased by rehab clinics and hospitals.

For Taft, the upcoming Nintendo controller tops every other possible solution for him. That’s partly because of his affection for all things Nintendo, but mostly because the one-hand controller holds out hope of playing games without much thought or consideration of the injury that has otherwise limited him.

“I won’t have to give up something that has been part of my life for the last 15 years and that I’ve probably dedicated thousands of hours to,” Taft said.