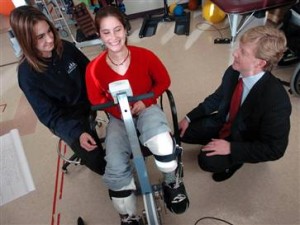 Therapy could help restore some function, some studies suggest

Vibrating tingles of electricity worm into the thin legs of paralyzed children, pulling at their muscles to pump up and down on a special bicycle.

It’s called electrical stimulation exercise therapy, and small but tantalizing studies suggest that this intense rehab just might help restore some function to people with spinal cord injuries, even if they were paralyzed long ago.

Desperate patients have sought this therapy since it was credited with helping the late Christopher Reeve regain the ability to feel human touch and move just a little, more than five years after a riding accident completely paralyzed the “Superman” star. Now scientists are putting the approach to a rigorous test — in a study with children that may begin to answer whether this sweat equity truly fuels recovery.

Patients “will do anything for a glimmer of hope,” cautions Dr. Randal Betz of Philadelphia’s Shriners Hospital for Children, which has a waiting list of 5- to 13-year-olds hoping to enter the study. “What’s appealing about the cycling is it’s not surgery, it’s not hurtful. … Everybody is hopeful that it will also show improvement in neurologic function.”

The idea: Remaining nerves in the spine may be dormant, partially recovered after the injury but essentially asleep as the brain can no longer send “get moving” messages down to them. Using electricity to stimulate those nerves and cause certain patterns of motion may teach them to carry signals locally, maybe even route new connections around the injury.

It’s controversial. Doctors have long thought that if the body repairs itself after a spinal cord injury — which does sometimes happen — any improvement will occur in the first six months, and that there’s no hope for further recovery beyond about 18 months. The paralysis sparks a slide into declining health from inactivity: infections, thinning and breaking bones, heart disease as muscles wither and fat accumulates.

But he’s sending patients home, 200 so far, with special exercise bicycles hooked up to Functional electrical stimulation, or FES, systems — sticky pads that deliver little electrical jolts to muscles through the skin, stimulating their legs to push the pedals. He’s persuading insurance companies to pay for the $15,000 bikes by arguing that, if nothing else, this aerobic-style, muscle-resistant exercise should lower medical bills by keeping the paralyzed generally healthier.

McDonald compared 48 paralyzed adults, half who pedaled an FES bike for at least three hours a week and half who had no special care. The exercise patients increased muscle strength, melted fat, and cut a complication called Spasticity, uncontrollable jerks that limit the recovery of those with some movement, he told a neurology meeting last fall.

“These benefits are so big that if that was all they got, it was good enough to do this,” McDonald says.

But 40 percent of the exercise group also regained some Motor function over three years compared with 4 percent of the “control” patients. It was modest but important improvement: some regained bladder control; some regained useful hand function; some moved from “prewalking,” moving their legs while being held up, to taking a few steps.

‘Incomplete story’
While McDonald says about 70 Rehabilitation centers have adopted FES cycling therapy since a medical journal published his report on Reeve in 2002, other specialists warn that individual successes don’t prove recovery is due to a therapy instead of the body’s slow healing over time.

“What we have at the moment is an incomplete story that is based upon … very little data,” cautions Dr. Mark S. Nash of the Miami Project to Cure Paralysis.

Hence the Shriners study. Although small, with 30 patients, it is the first stringent comparison of FES cycling with passive exercise — someone moving their limbs — or electrical stimulation alone. Early results are expected in a year.

McDonald notes that children in general recover from neural injuries better than adults, and points to remarkable progress by one of his own patients, 15-year-old Loretta McRae.

Paralyzed from the shoulders down after a diving accident in Australia a year ago, Loretta since November has exercised five days a week on the FES bike and with a similar electrical stimulator strapped to her wrists. She now can walk several wobbly feet with a cane, and last week took a few tentative but jubilant steps unassisted. She can go to the bathroom alone. Her hands are unfreezing.

Would Loretta have recovered this much anyway? There’s no way to tell, although early return of sensation was a good sign.