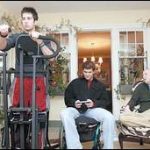 MISHAWAKA — Joey McTigue relies on his muscular shoulders and arms to pull himself down the lane of the Memorial Hospital’s rehab pool. Leg power isn’t available. A float holds his knees together and keeps his legs from sinking.

It really doesn’t matter how fast he goes. Speed is no longer the main goal for the former Michiana Soccer Association standout.

Instead, his workouts are about time.

Joey, paralyzed in a car accident one year ago, exercises to stay in shape while awaiting his turn for an experimental stem cell transplant.The operation — performed only in Lisbon, Portugal — will have the best chance of success if the Marian High School graduate can slow down the inevitable Atrophy of his lower body.

That’s not easy for someone who is paralyzed, even for an athletic 22-year-old man who always reveled in physical activity.

Joey’s back was broken just below the shoulder blades, leaving him without voluntary movement or sense of touch below his sternum.

Besides working out in the pool, which provides cardio benefits and keeps his legs limber, he spends almost four hours a day on specialized equipment. That includes a tedious two-and-a-half-hour routine in which he electrically stimulates the paralyzed muscle groups.

He has already come a long way from the wreck, which took the life of a fellow student from the University of Iowa.With the help of his supportive family, Joey says he has come to grips with the prospect of permanent Paraplegia and all that means for a young person.

Last fall, only eight months after his injury, he went back to school at Iowa, where he uses arm power to wheel himself to his economics classes.

Normally, going back to school would cap a successful comeback for a student suffering a complete spinal cord injury like Joey’s.

But Joey and his family are determined to take his recovery one step further, by leaving the country and visiting the frontier of clinical stem cell research.

No options in U.S.Surgeons can rebuild the bones of a broken spine and deftly realign the Vertebrae.

Repairing the mysterious rope of nerve fibers inside the hollow spinal column is another matter.

No experimental treatments for spinal cord injury have been approved for practice inside the United States.

That’s why Joey’s father — Dr. Stephen McTigue, a well-known ear-nose-throat surgeon in South Bend — had to search the world to find one.

What he has found is a transplant, invented by a Portuguese neuropathologist named Dr. Carlos Lima, that uses stem cells from the patient’s own body.If all goes as planned, in mid-June ear-nose-throat surgeons at the Hospital de Egaz Moniz in Lisbon will slice a small square of tissue from the top of Joey’s nasal cavity.

Another group of doctors, neurosurgeons, will implant it inside his spinal cord, at the site of his injury.

Such tissue contains millions of olfactory nerve cells, whose main job is to transmit sensory signals to the base of the brain and give us the sense of smell.

What makes them potentially useful for Joey and other paralyzed patients is that they also happen to be stem cells, which have the marvelous capability of transforming themselves into other kinds of neurons.

Once placed at the site of the injury, it’s hoped that these stem cells will do their thing: spontaneously evolve into the different kinds of nerves wiped out by the trauma of the accident.Stephen McTigue says he likes Lima’s approach because it does not involve destruction of embryos, the cells are easy to extract, and they will come from Joey himself, removing risk of rejection.

He said many of the 70 or so people who have received the $50,000 operation have reportedly benefited, although none is cured. The procedure has not yet been subjected to a rigorous, FDA-approved clinical trial.

The fact that Joey’s injury is relatively recent and he’s working hard to keep himself in shape are in his favor, his father said.

At the same time, the McTigues said they are keeping an eye out for other options that may come along over the next few months, said Connie McTigue, Joey’s mother.In particular, they’re checking into a less invasive procedure done in Russia that does not require a major spine operation.

The trip from Iowa City, Iowa, to the ski lodges of Aspen, Colo., is about 900 miles.

The drive usually takes about 15 hours, not counting a tragedy.

Joey and four friends set out around 10 p.m. Jan. 2, 2005.Joey’s Ford Explorer was “totally stuffed” with skis on the roof, luggage in the back and college students in the seats.

The weather, OK at first, steadily worsened. By the time the party stopped for gas in Nebraska, driving conditions were bad enough to spur a discussion of stopping to wait out the storm.

“But we were so gung-ho, we got back on the road,” Joey recalls.

Joey took the wheel, driving cautiously for the next hour or so. There were cars in the ravines on the sides of the roads.

But then conditions on the interstate improved.”The road seemed fine,” he recalls. “The next thing I know, I’m going probably 65.”

Before 6 a.m., the Ford hit a patch of black ice on Interstate 80 in Nebraska between the Shelton and Wood River exits, according to the Hall County Sheriff’s Department.

The road was curving to the right, but the car, spinning and out of control, kept going in the same direction. The wheels caught on the edge of the road, and the vehicle flipped.

The Explorer landed on its top, with the brunt of the impact borne by the left edge — Joey’s side. He felt a jarring pain in his back.

“I was like, ‘That was bad,’ ” he said. “I knew instantly I was hurt.”He wouldn’t know until about 12 hours later that his friend, 21-year-old Jordan Kline, of Iowa City, had been killed in the same instant Joey’s spine was crushed.

“Jordan was sitting directly behind me,” he said.

Suspended in the driver’s seat, Joey screamed Hail Marys and thought for sure he was going to die. Then firefighters used a tool to cut open the Explorer.

“Dragging me out hurt worse than the actual impact,” he said.

They put him in an ambulance and gave him painkillers.”I was happy to be alive,” he said. “I didn’t know what happened to my friends.”

Connie McTigue was relieved that her son’s face was not cut up. But the whites of his eyes were disturbingly red, as if someone had colored them in with a paint brush.

She saw him in the hospital in Lincoln, Neb., a half-hour before surgeons used eight metal rods and bone shaved from his pelvis to cobble his Vertebrae back together.Ten days after the accident, he was flown to the Rehabilitation Institute of Chicago to continue his recovery.

Friends and family rallied to his side. They kept his spirits up, and he tried to put on a brave face for them.

“I got the feeling that their mood depended on mine,” he said.

It was not until he returned to the family’s home in Mishawaka, six weeks after the crash, that reality hit. He was overwhelmed. “I realized, ‘I’m in a wheelchair and that’s how it’s going to be,’ ” he said.

He had lost a lot more than sports.A complete spinal cord injury like his means having no sexual function. Simple things like going to the bathroom become medical procedures; he must use a Catheter or suppositories to induce evacuation of his bladder or bowel.

It irks him to always be looking up to people. He’s tall, 6-foot-1, but his chair keeps him at “belt level.”

“I was in college and then I’m back at my parents at like an infantile stage,” he said. “It was depressing.”

But during his continuing rehab at Memorial Outpatient Therapy Services, Joey said he made a decision.

“I decided I can’t think like that,” he said. “The only thing we’re really in control of is our own attitude.”There are many things for him to be grateful for, he said.

A few inches higher, and the injury would have made him a quadriplegic in comparatively frail health, like the late actor Christopher Reeve.

He said he’s also grateful that his family can afford to buy him the expensive equipment he uses to exercise and to send him oversees for an experimental surgery.

“Before this, I worked at a bar and was totally wrapped up in the social scene,” he said. “This has made me realize that family is so much more important.”

Promise of stem cellsDr. Robert Yount, a neurosurgeon in South Bend, is confident that scientists will overcome the barriers — ethical and technical — that now stand in the way of stem cell therapy.

Yount, who went to medical school with Stephen McTigue, is one of Joey’s doctors.

He said repair of the bony spine itself has advanced to a “fine art” during his two decades of practice. But there have been virtually no advances in restoring the function of the cord itself.

“We’ve been down in the ditches trying to get 2 or 3 percent improvement while what we need is a quantum leap,” he said. “That’s going to be stem cells.”

Yount has read about Lima’s procedure and believes it makes sense.”The basic science is sound,” he said. “And from the reports, some patients have received significant benefits.”

Joey said he will be disappointed if he gets nothing at all from the surgery,

He’s hoping to regain bladder and bowel control so he can go to the bathroom in the usual way.

Maybe even some sense of touch in his legs, and, if he’s lucky, some control over his leg muscles.

“I would love being able to stand up,” he said. “I think there’s a pretty good chance of that.”After the operation, he faces a second round of rehab, this time at the Rehabilitation Institute of Michigan, in Detroit.

It promises to be every bit as grueling and intense as the first one following his accident.

The avid wheelchair basketball player says he’s ready for it.

“Honestly, the idea of working out six hours a day doesn’t faze me a bit,” he said. “I’ve always been a physical person.”