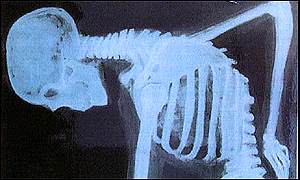 Scientists have succeeded in restoring movement to rats paralysed by spinal injuries.

The breakthrough could ultimately lead to new treatments for people who have been paralysed by damage to their spinal cord.

An average of two new cases are admitted to hospital every day in the UK alone.

Once the spinal cord has been damaged, the injuries tend to be permanent because nerve cells cannot regenerate themselves.

But researchers from King’s College London have discovered that a chemical in the body can make Regeneration possible.

One of the main reasons why nerve cells do not regenerate is that scar tissue forms at the injury site.

This stops the nerves from growing back.

However, a bacterial enzyme called chondroitinase ABC destroys some of the molecules in the scar, allowing nerves a path along which to grow back.

“After damage to spinal cord tissue, a complex jungle of molecules is deposited in the scarred area.

“Chondroitinase ABC acts like a ‘molecular machete’, cutting a path through the jungle of molecules that usually prevent spinal cord nerves growing back into these damaged areas.”

They found that nerve regeneration occurred in both the sensory and Motor nerves in the spinal cord.

It was also shown that cells above the damaged area were able to transmit signals and communicate to those below.

Most importantly, the team at King’s College London demonstrated that rats with spinal injuries, after treatment with the enzyme, recovered much of the neurological function they had lost.

The rats, which were previously disabled, showed near normal walking behaviour, although they did not recover normal sensory function.

The researchers hope that treatments based on chondroitinase ABC will eventually be combined with therapies that tackle the other problems that prevent nerves from re-growing.

Dr Bradbury said: “This is a great advance, but not some sort of miracle cure.

“There are still many other blocks that must be overcome before complete spinal cord repair can be achieved in humans.

“In terms of treating people, we could see clinical trials involving this treatment as part of a multi-targeted therapy starting within the next five years.”

He said: “Turning off the blocking action of certain molecules in the spinal cord has unlocked tremendous potential for damaged nerve cells to regrow.

“The next stage is to combine this therapy together with several others in order to develop a clinical trial protocol.”

He said: “A complete recovery from a spinal cord injury would have fair reaching social and economic benefits for many hundreds of people who are injured each year.”

The research is published in the journal Nature.