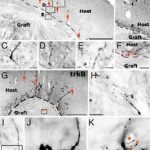 For the first time, researchers have clearly shown regeneration of a critical type of nerve fiber that travels between the brain and the spinal cord and which is required for voluntary movement. The regeneration was accomplished in a brain injury site in rats by scientists at the University of California, San Diego School of Medicine and is described in a study to be published in the April 6th early on-line edition of the Proceedings of the National Academy of Sciences (PNAS).

“This finding establishes a method for regenerating a system of nerve fibers called corticospinal motor axons. Restoring these axons is an essential step in one day enabling patients to regain voluntary movement after spinal cord injury,” said Mark Tuszynski, MD, PhD, professor of neurosciences, director of the Center for Neural Repair at UC San Diego and neurologist at the Veterans Affairs San Diego Health System.

The UC San Diego team achieved corticospinal regeneration by genetically engineering the injured neurons to over-express receptors for a type of nervous system growth factor called brain-derived neurotrophic factor (BDNF). The growth factor was delivered to a brain lesion site in injured rats. There, the axons – because they now expressed trkB, the receptor for BDNF– were able to respond to the growth factor and regenerate into the injury site. In the absence of overexpression of trkB, no regeneration occurred.

Although functional recovery in the animals was not assessed, the new study shows for the first time that regeneration of the corticospinal system – which normally does not respond to treatment – can be achieved in a brain lesion site.

“The next step will be to try this in a spinal cord injury site, once we get the injured neurons to send the growth factor receptor all the way down the axon and into the spinal cord,” said Tuszynski, adding that the UC San Diego research team is now working on this. “We will then assess whether regeneration of corticospinal nerve fibers will lead to functional recovery and restored movement in animal models.”

This work builds on another study from Tuszynski’s laboratory, published in the February 8, 2009 issue of Nature Medicine, which reported that BDNF also exhibits potential as a therapy for reducing brain cell loss in Alzheimer’s disease.

The lead author of the study was Edmund R. Hollis II, PhD. Additional contributors to the article included Pouya Jamshidi, Karin Low and Armin Blesch of the UC San Diego Department of Neurosciences. Their work was supported by grants from the National Institutes of Health, the Veterans Administration, the Dr. Miriam and Sheldon G. Adelson Medical Research Foundation and the Bernard and Anne Spitzer Charitable Trust.

Adapted from materials provided by University of California – San Diego.