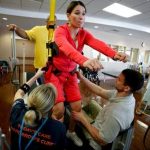 A bullet remains lodged in Michelle Alexander’s spinal cord nearly six years after her husband shot her four times — instantly paralyzing her — before killing himself in July 2004.

Doctors told her she’d probably never walk again. But a rehabilitation strategy being pioneered at the University of Louisville is changing her fate.

Today Alexander uses a walker to get around, takes tentative steps with two canes and gets on a specially designed treadmill four days a week as part of a research study evaluating Locomotor training, which UofL’s Susan Harkema helped develop to teach lost skills to broken nervous systems.

It’s one of several areas of spinal cord research at UofL and the University of Kentucky, home to two of about 10 large centers for such work in the nation.

“Without the research, we wouldn’t get anywhere,” said Alexander, 39, of Sellersburg, Ind. “Before, I couldn’t walk or sit up or eat by myself. … Now I can do the laundry. I can stand up and cook. … And, you just feel more whole when you can do things.”

About 4,000 people in Kentucky and Southern Indiana live with spinal cord injuries, a small fraction of the national total, which the Christopher & Dana Reeve Foundation estimates at 1.275million.

Yet Kentucky has become a national hub for spinal cord research because of two funding streams: Bucks for Brains, state money that brings top researchers to the two universities, and the Kentucky Spinal Cord and Head Injury Research Trust, which began funneling some speeding ticket revenue to research 16 years ago.

UofL and UK “are both very excellent research centers … very respected throughout the scientific community,” said Kim Anderson-Erisman, a spinal cord injury patient and researcher who is education director at the Miami Project to Cure Paralysis, another large research center.

Kentucky scientists are exploring various treatment approaches with the major objective of getting people to walk, but the work also focuses on more modest goals, such as helping those with quadriplegia use their arms.

Such gradual improvements, Kentucky and national experts said, call for an array of treatments, instead of a magic-bullet cure — including rehabilitation, drug therapies, therapeutic hypothermia and electrical stimulation.

Experts elsewhere agreed. “There is momentum now,” said Susan Howley, executive vice president for research at the Reeve Foundation in New Jersey, which funds spinal cord research and advocates for patients. “There is a critical mass of basic understanding of the normal spinal cord and what happens in injury, and that has created a perfect storm.”

Kentucky is at the center of that storm, Howley said, noting that UofL is the lead center for the Reeve Foundation’s NeuroRecovery Network, which links rehabilitation centers providing innovative, activity-based therapies.

On a recent morning, Alexander stood on a treadmill for such therapy at Frazier. With her body weight supported by a harness, a therapist and three techs helped her stay steady while moving her legs correctly. The goal is to gradually use less support as healthy neurons reorganize the nervous system’s circuits.

Later in the session, health workers stopped the treadmill and placed a chair on it. Physical therapist assistant Terri Dugan asked Alexander to sit down and then try getting up.

“One, two, three!” Alexander said as she stood, then smiled and gave Dugan a high five.

UNIQUE IN WORLD
U of L research centerinspired by struggles

Most injuries don’t fully sever the spinal cord, but instead cause fractures or compressions of the vertebrae, which crush axons, extensions of nerve cells that carry signals up and down the spinal cord. The extent of paralysis depends on the severity of the injury and its location on the cord, and patients often face such complications as pneumonia, pressure sores, sexual dysfunction, and bowel and bladder problems.

Dr. Christopher Shields, a Norton Healthcare neurosurgeon, said patients’ struggles inspired him to help create UofL’s Kentucky Spinal Cord Injury Research Center, which officially was recognized by the university in 2001. In the early 1990s, Shields worked with a Kentucky legislator whose niece was injured in a car crash to develop the speeding-ticket funding program, which at first brought in $12.50 from each ticket and now gets 6.5 percent of all court costs.

Additional funding for UofL’s center comes from Norton, which put $4million toward the neuroscience department to help create endowed chairs in spinal cord research, and continues contributing about $100,000 to $150,000 a year. The center now has a research budget of $7.3million, more than half from National Institutes of Health grants.

Shields is no longer with UofL, and the center’s scientific director is now Scott R. Whittemore, who came to the university from the Miami Project in 1998 as one of the first Bucks for Brains professors. Harkema, another Bucks for Brains hire, joined the program in 2005 from the University of California at Los Angeles.

“We are the only center that really integrates basic science and clinical research,” Whittemore said. “It is unique in the country and in the world.”

Whittemore focuses on basic science. He co-directed a team of researchers who recently published a study demonstrating how genetically modified adult stem cells, transplanted into the injured spinal cords of rats, can help restore electrical pathways associated with movement. This helps rats recover by regenerating the myelin that insulates axons. Questions remain about whether this approach may cause tumors, however, so it can’t yet be tried in humans.

“Locomotor training develops the intrinsic capacity of the spinal cord to be smart,” said Harkema, the center’s rehabilitation research director. “A neuron can change its function, its behavior … when it’s exposed to activity.”

Harkema said 89 percent of 300 patients followed nationally by researchers improved some type of function through this therapy. The rate of recovery often depends on how long it’s been since the injury, and is often quicker in the very young. But Harkema said, “there’s no evidence it’s ever too late to do anything.”

The extent of recovery also varies. Some people, such as Alexander, make huge gains, while others improve in smaller but significant ways. Larry Biven of Crestwood, who was left a quadriplegic after a car accident 4½ years ago, said the therapy has allowed him to breathe better and improve his bone density. He’s now working toward using his arms.

“Do I want to walk someday? Yes,” said Biven, 54. “But it’s the little things too” — like standing up and walking with help. “It made me feel like a human being again.”

About 80 miles away in Lexington, UK’s spinal cord research takes place at a center that also tackles brain injury. Its annual budget of $6.7million is equally divided between the two.

Like UofL’s research, UK’s is wide-ranging. It includes finding ways to minimize damage after spinal cord injury, getting nerves to grow new axons and restoring connections in the nervous system. Researchers are also exploring why salamanders can regenerate limbs.

Drug therapy is one promising area being explored at UK.

Edward Hall, the center’s director, is widely known for a 1990 discovery that giving a high dose of a synthetic steroid within eight hours of a spinal cord injury can improve motor function. In about five years, he said, his center hopes to begin human testing of new drug treatments.

Hall’s core faculty includes Alexander “Sasha” Rabchevsky, who uses a wheelchair after being paralyzed from the chest down in a 1985 motorcycle accident. On his office door, near a large tie-dyed peace sign, are small signs saying “Got Mobility” and “life is good.”

Rabchevsky’s work includes testing compounds that would help protect tissue by stabilizing mitochondria, the so-called powerhouses of cells. He’s also looking for answers to a potentially life-threatening condition called autonomic dysreflexia. It’s caused by irritants such as sunburn, ingrown toenails or bedsores, and can result in high blood pressure and even strokes.

Rabchevsky said he would love to find new treatments for spinal cord injury complications or new ways to help people like him live more independently.

“Recovery to me is any incremental improvement,” Rabchevsky said. “Improving daily quality of life is important.”

Dr. Richard Borgens, a neuroscience professor at Purdue University, said that’s an important distinction — science likely will continue bringing gradual improvements for people with spinal cord injuries, he said, but it probably won’t lift everyone out of wheelchairs any time soon.

“I’ve been doing this since 1978, and a long time ago I gave up using the word ‘cure,’” he said. “I don’t believe that’s in the cards — not even in the lifetimes of my students.”

UK researcher Stephen M. Onifer agreed that recovery isn’t all about walking. Onifer is using rats to try to induce “sprouting,” or getting axons to grow into fibers that are still intact, with the ultimate goal of helping quadriplegics use their arms.

Zack Murphy, 22, was only 16 years old when doctors told him he’d never walk again after a rare spinal cord stroke paralyzed him from the chest down. Just days earlier, he’d been playing golf and training for the miniMarathon.

Murphy, of Goshen, did Locomotor training at Frazier in 2007 and in 2008, and gradually learned to walk with a walker. He recently began a new round of the training while also getting therapy to use two canes.

On a recent day, Dugan helped him stretch on a mat, and then had him stand in front of a mirror and work to stay balanced.

Finally, Murphy stepped forward with his canes as Dugan held onto him. They walked slowly down a hallway and back, with Murphy dragging part of one foot.

Murphy said he plans to keep pushing himself, with an ultimate goal to “walk with no device whatsoever.”

Alexander, who is remarried and has a 19-year-old son, nurtures similar big dreams.

“I’d love to go climb rocks. When you can’t do something, you want to do it,” she said. “You’ve gotta have the research. It gives us the chance to walk again.”