Clinton woman to get stem cell transplant in China 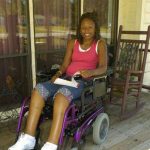 Sonya Watson hasn’t walked since a terrifying wreck left her a quadriplegic, but she still dreams of getting out of her wheelchair.

This week, those dreams will take her to the other side of the world where she will undergo a controversial stem cell transplant.

“I am doing this because the doctors told me I would never walk again and I don’t believe that’s true,” said the 25-year-old Clinton woman. “I can’t get stem cell injections here at all.”

Watson was just 17 and driving her grandmother to the eye doctor one day nine years ago when, she says, a defective speed-control system on her 1995 Ford Explorer caused her to lose control. The car flipped several times, leaving her with a broken neck.

Watson sued Ford Motor Co. and two years ago won a $15 million judgment. Another $3 million was awarded to the estate of her aunt, who died in the crash.

Ford, which said the accident was caused by driver error, is appealing.

Watson hasn’t received any of the award, but that hasn’t stopped her. She and her family and community and church have worked to raise money to send her to China, where she hopes spinal cord surgery with transplants of umbilical cord blood stem cells will enable her to walk again.

Watson came across Qingdao Hospital while doing research about possible treatments on the Internet.

Qingdao is associated with Beike Biotechnology, a Chinese company which advertises on its Web site that it’s used stem cell therapy since 2001 on more than 3,000 patients with conditions ranging from autism to Alzheimer’s. It claims that 70 percent to 80 percent of patients are satisfied with their outcomes, with “the best results” for five conditions, including spinal cord injury.

“They are more familiar with this procedure and they have done it with other people who have been paralyzed,” says Watson. “They give me an 88 percent chance to walk again.”

Stem cells have the potential to develop into many other cells, offering hope for people with many ailments. But are these facilities offering a legitimate treatment, or exploiting desperate people?

Susan Howley, executive vice president for research with the Christopher and Dana Reeve Foundation, says patients should beware. While stem cells show promise for a variety of conditions, international experts agree that the research in spinal cord injury is in its infancy, she says. Moreover, transplant centers cropping up in China, South America, Portugal and elsewhere have not produced the scientific evidence to show their therapy works.

“These people are selling unproven experimental treatments,” Howley says. “And all of us in the field worry that patients at least understand the potential outcomes other than a cure that might emerge.”

Those outcomes could include no improvement at all, infection and other surgical complications, and loss of even more function, she says.

Watson, who is paying $53,000 out-of-pocket for the procedure, says she’s not afraid the hospital may only be interested in her money. She says she’s spoken with three paralyzed Americans who had the treatment, and two could walk afterward. She says she saw pictures of the hospital on the Internet, and that it “looks clean and nice.”

And more importantly, she says, she longs to run and play with her 3-year-old son, Jakobe.

“I’m a very determined young lady, and by God’s grace, I’ll be walking earlier than a year,” she says. “But if things don’t go the way I hope, at least I can’t say I didn’t try.”

A friend will accompany Watson on the 14-hour flight and stay with her for the month she’ll be in China. One of her South Carolina doctors will arrive a week into her stay to monitor her care, she says.

Wally Fayssoux, Watson’s attorney, says he admires her courage and hopes the transplant works. As it is now, he says, her life is a struggle for survival every day. She has only limited movement in her arms, suffers pain and spasms, and must rely on her parents to get her out of bed, bathe her, and tend to most of her other needs.

“She’s done a lot of research on it and anything she can find that would give her hope that life might get a little easier, she’s going to latch on to it,” he said. “I don’t know if there’s any medical substance to it. But I know if I had to wake up every day and face those same challenges, I’d do whatever it took.”