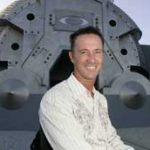 An Irvine professor studies stem cells to look for a treatment for spinal cord injuries.

The motorcycle roars to life.

From his wheelchair David Bailey watches it take off.

For years, the promise of even modest recovery from the type of chronic spinal cord injury that Bailey had two decades ago has been little more than a cruel mirage.

Now, because of cutting-edge work being done by a UC Irvine professor and his researchers, Bailey and others paralyzed by spinal cord damage dare to hope.

Waiting this week outside the too cool headquarters of sunglasses maker Oakley Inc. before a fundraiser in support of UCI stem cell research, Bailey looks a little uncomfortable.

“I haven’t been out of my house in what feels like two years,” the 45-year-old married father of two teenagers says.

Tanned and still blessed with the athletic build that propelled him to the top of his sport in the 1980s, Bailey is a bit overwhelmed by all the people and attention.

His excitement is palpable.

Industry contacts, friends and potential donors are gathering to hear a presentation by Hans Keirstead, co-director of the Sue and Bill Gross Stem Cell Research Center and associate professor in the Reeve-Irvine Research Center at UCI, the international hub for spinal cord injury research.

Keirstead is a sort of rock star in the field of human embryonic stem cell research. His findings have been featured on “60 Minutes,” and his work has been published in leading journals.

He gives hope to hundreds of thousands of people with chronic spinal cord injuries that some recovery will be possible in their lifetimes – even in a few years.

“There was a time I pretty much closed the book on it (recovery),” says Bailey, paralyzed from the waist down in a crash during practice before the start of the 1987 Supercross season.

That book is now wide open, he and others say.

Another paralyzed motorcycle racer, Ricky James Jr., 19, has come to hear Keirstead talk. James has $200,000 in a trust fund – money he’s been saving for his first home.

Keirstead starts his presentation, and from the first row, James watches and listens intently.

Every year in the United States, about 10,000 people are paralyzed by spinal cord injuries – most of them in car crashes.

The majority aren’t former superstar athletes like Bailey or James, or rising motocross heroes like Costa Rican Ernesto Fonseca, 24, who injured his spine in March 2006 and cannot move or feel anything from his nipples down.

Injuries in motocross racing are rising as bikes have gotten faster, researchers say.

Yet the motorcycle-racing industry and extreme-sports universe at large have been slow to embrace efforts like Tuesday’s fundraiser, which tried to raise $1.5 million to speed up the time it will take for Keirstead’s research to reach the critical stage of human clinical trials.

The charismatic professor boldly declares it’s a matter of when, not if, people like Bailey and Fonseca will be able to regain movement.

“We’re not there yet,” Keirstead tells the gathering of about 150 before launching into a detailed summary of his research. “But we’ve very, very close.”

Keirstead’s team provided the first physical evidence that the therapeutic use of human embryonic stem cells can help restore Motor skills lost from acute spinal cord tissue damage. The study, which involved tracking mobility in rats, appeared in the May 11 issue of The Journal of Neuroscience.

“Keep your son healthy and make sure he stays as physically active as possible,” Keirstead told James over the phone.

“In five to seven years, I will fix him,” Keirstead added.

In a slide and video presentation before a rapt audience that includes potential donors, Keirstead delves into his esoteric research, where he tosses off words like “Oligodendrocyte” and “reinervation” like punch lines.

Now in development for clinical trials, findings by the Keirstead Research Group show promise not only for the treatment of spinal cord injuries, but also for other diseases such as multiple sclerosis and rheumatoid arthritis.

Ample state and corporate money will be available once human clinical trials start, but Keirstead says his team needs $1.5 million now to get through what he calls the boring but necessary preclinical stage of repeating experimental findings, performing safety studies and quality checks, and doing other unglamorous work.

At stake, he says, is nothing less than getting people like Bailey, James and Fonseca moving and possibly out of their wheelchairs.

Keirstead says he hopes go to the Food and Drug Administration by the end of the year to win approval to perform testing on humans – the key stage in finding a possible treatment for spinal cord injuries.

The pain of living in a wheelchair largely remains behind the curtain, Bailey, James and Fonseca tell the crowd after Keirstead’s presentation.

No sexual function. No control over bowel and urinary functions.

Their drive to find a cure for spinal cord injuries isn’t entirely self-motivated, they say.

“I want to do what I can to help people with spinal cord injuries,” says Fonseca, who has a wife, Carolina, of seven years. “I’m just trying to do my part.”

Orange County and the action-sports industry are flush with money, but until now few have been motivated to dump serious cash into such a new field as embryonic stem cell research, Keirstead says.

Athletes like Bailey and Fonseca and the families and friends who support them clearly show why things must change, says the professor, whose research center at UCI was founded in 1999.

At the end of Keirstead’s presentation, James Jr. makes a tearful announcement.

“I may get in trouble for this,” he says. Then he announces he will donate his $200,000 to Keirstead and forget about buying a home for now.

His father walks over and hugs him.

Unsupervised Trampoline Use Contributes to Jump in Children’s Injuries