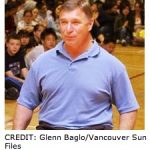 Twenty years ago, the kind of spinal-cord injury Caleb Brousseau sustained when he landed badly from a 12-metre jump while snowboarding in February would have left him in traction for months, contemplating a world of limited opportunity from a wheelchair.

These days, the 18-year-old Terrace high school student — who was made Paraplegic by the accident — is up and about, playing ball hockey with other spinal cord patients and feeling pretty good about what life has to offer.

“Right now,” he said, “not being able to walk is not a blessing, but it’s not a bad thing either. . . . I wouldn’t have the opportunities that I have right now if this [the accident] hadn’t happened.”

Brousseau may be young, but he knows where the credit goes for many of the improvements in spinal care treatment and wheelchair accessibility of which he is already the beneficiary.

And on Tuesday night, immediately after his release from G.F. Strong Rehabilitation Centre in Vancouver, Brousseau bravely rolled his wheelchair onto the stage of the Red Robinson Theatre in Coquitlam to pay his respects to Rick Hansen at a celebration honouring the 20th anniversary of Hansen’s Man in Motion tour.

Hansen, he said, “really made being in a wheelchair acceptable.”

The event marked Brousseau’s first public-speaking engagement, but likely not his last. He brought the audience packed with dignitaries, scientists and researchers to its feet with his incredible story of injury and recovery, and now sees a possible future in being a public speaker.

“I got so inspired by everyone else. It was great,” Brousseau said of Tuesday’s experience. “After that night, I thought, ‘Wow, you can do anything if you just put your mind to it.'”

Few who heard Brousseau speak that night would have been more impressed with the young man’s strength of character than the Man in Motion himself.

“He’s got courage,” Hansen said in a later interview. “His future is going to be incredibly bright.”

It is stories like Brousseau’s — of personal triumph, large and small — that keep Hansen in motion, even after two decades of hard work.

“My mission is to try and make a difference, at the end of the day,” he said.

It’s with that belief that Hansen, 49, who was paralysed following a vehicle accident at the age of 15, pushed his wheelchair out of Vancouver to begin the Man in Motion tour back in March, 1985.

When he returned to the city, on May 22, 1987, Hansen had travelled more than 40,000 kilometres through 34 countries on four continents, raising $26 million in cash along the way and inspiring hundreds of thousands of people around with world with his message of hope and boundless possibility.

The tour, which began as a physical challenge for the Olympic-class athlete, evolved into an experience of a lifetime for Hansen, who continues to raise funds and awareness for spinal cord research and quality of life initiatives through the Rick Hansen Foundation.

Today, the foundation, which Hansen founded in 1988 and of which he remains president and CEO, has leveraged an estimated $178 million towards his cause from government, and community and corporate donors.

The money has trickled down in various forms across Canada, such as Wheels in Motion, an annual walk/run/roll event that has helped to launch more than 500 community-based initiatives across the country dedicated to Hansen’s spirit of inclusiveness.

The foundation also supports a highly successful school program aimed at encouraging a sense of social responsibility in youth, and engaging them in creating more accessible communities for people with disabilities.

At Rick Hansen Secondary in Abbotsford, one of three specially designed, wheelchair accessible schools in Canada bearing the same name, principal Jinder Sarowa said Hansen’s personal story of determination and rising above his challenges is a natural motivator.

The students, said Sarowa, “are easily attracted to his message. That’s really important. . . . If Rick can accomplish going around the world, being disabled, then we, as individuals, can accomplish anything, even if we think it might be too big.”

Reaching the wider community, the foundation brings a similar message to people across Canada through its ambassador program, giving a voice to people with spinal cord injury, raising awareness and inspiring a need for positive change.

“It’s so important to teach our kids and our societies and our communities that people with spinal cord injury are wanting to be included, to have accessible places to go and play and work,” said Marika van Dommelen, a volunteer ambassador from Langley.

More recently, Hansen has been credited as the driving force behind the construction of a spinal cord facility at Vancouver General Hospital, the provincial centre for all acute-care spinal cord injuries.

The $48-million International Collaboration on Repair Discoveries (ICORD) Centre, scheduled to open next year, will bring together spinal cord patients, research scientists, doctors, biomechanical engineers and rehabilitation therapists all working towards advancements in spinal-care treatment and recovery, including groundbreaking work in the area of nerve-cell Regeneration.

“It fundamentally changes how we do things,” said Dr. Marcel Dvorak, a Vancouver spine surgeon and leading proponent of the centre.

“It is really going to set the stage for excellence in spinal cord treatment,” he said.

Currently, experts and patients involved in spinal cord care are housed in different facilities across the city, and communication among the parties is difficult.

Dvorak said the idea of the centre that “brings together discoveries [in spinal cord treatment] from test tube to bedside,” had been floated around by various medical professionals, but it was Hansen who pulled together the right people needed to push the project into reality.

“He [Hansen] initiated the sessions where we all sat down and said, ‘What about a building, a centre where we can all work together?’,” Dvorak said.

When the project ran into a funding crunch, Hansen’s foundation provided the final $8 million “just so we can get this thing built, because it is so important,” Dvorak said. “And it is now being built.”

The centre will also house a new information network designed to track and record “best practices” in spinal cord treatment across the country and internationally, as well as the Rick Hansen Spinal Cord Injury Registry, allowing doctors and experts across the country to share vital information on what works and what doesn’t for specific kinds of spinal cord injuries.

Hansen put up the seed money to get the registry started about three years ago, said Dvorak. More recently, the federal government recognized its worth, stepping in with an investment of $30 million.

Prior to the registry, doctors and experts tended to work in relative isolation, with the number of patients too small in each region to build reliable statistical databases or clinical studies on their own.

This is Hansen’s greatest legacy, said Dvorak: His uncanny ability to motivate people to work together towards a common goal.

“What Rick’s done, specifically, is he has created a culture in Canada where spinal cord injury research is now a priority,” Dvorak said.

“All you have to do is talk to him for a while and you realize there is this compelling presence there,” he said.

For Hansen, the past 20 years have brought remarkable advances in surgery. According to the foundation, 90 per cent of what we know about spinal cord treatment has been learned in that time.

Public attitudes towards disabled people and wheelchair accessibility has also greatly improved over the years.

But it’s only the halfway point in his lifelong journey to find a cure for spinal cord injury, Hansen said.

Twenty years ago, Hansen said, only 30 per cent of newly injured spinal cord patients could hope for “some” improvement in their overall mobility. Today, that statistic is closer to 70 per cent and with patients experiencing much greater recovery of body motion.

In 20 years, Hansen said, recovery from spinal cord injury should be as standard as when you break your leg.

Those who doubt that possibility obviously have never heard Hansen speak.

One of the most important life lessons he learned back on the tour, he said, is never to think of the journey as a whole, but rather in little bits and pieces.

“That way, you can set little goals, little steps, that help build a pathway . . . and inside each one of those [goals] is an adventure and a big dream.”

TODAY: The legacy of the Man in Motion tour and the people who have benefited from Rick Hansen’s incredible journey.

SATURDAY: A look back at the people who made the Man in Motion tour a reality and how it has affected their lives.

How and how many

– Most common causes of spinal cord injury in Canada are: Motor vehicles collisions (55 per cent), other medical conditions and sports injuries (27 per cent), and falls (18 per cent).

– The unemployment rate for people with SCI is 62 per cent.

– The cost to the Canadian health system is between $1.25 million and $25 million during the lifetime of each injured person, depending on the severity of the injury. Annual health-care costs for those with spinal cord injury are $750 million.

– 90 per cent of what we know about spinal cord injury has been discovered in the last 20 years.

A Severe Injury Brings Concern, and a Call for Insurance