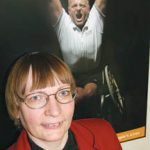 The treatments don’t cure severe spasticity, but can relieve its symptoms so that patients can maneuver their own wheelchairs without assistance, feed themselves, or even master enough muscle control to become active in the work force, says Stanek, owner of Northwest Medical Rehabilitation PS.

“Spasticity occurs in many different disease processes,” Stanek says. “An inflammation in the brain or spinal cord can create an imbalance of muscle tightness,” such as muscle spasms for people suffering from a spinal injury or who were born with cerebral palsy.

“I work with patients with disabilities and help them become Functional,” she says.

Stanek is a certified physiatrist, which means she’s a medical doctor who specializes in physical medicine and rehabilitation.

“I prescribe therapy, but I don’t do therapy,” she says, adding that follow-up therapy is “a very important piece” of any patient’s total rehabilitation program.

Stanek says she’s one of few physicians here who prescribe the use of implantable baclofen pumps and injections of Botox, known more widely as a cosmetic surgery drug, to combat the condition.

Baclofen pumps, implanted in a patient’s abdomen, provide a steady flow of medicine through a Catheter that’s inserted into the intrathecal area, a spot underneath a certain membrane around the spinal cord.

Spasticity is characterized by tight, stiff muscles that make movement, especially in the arms or legs, difficult or uncontrollable. Patients diagnosed with spasticity most often have suffered a serious injury to their spinal cord or brain, while others have cerebral palsy, Multiple Sclerosis, or are victims of strokes.

The pumps Stanek prescribes are implanted by surgeons and are known as Intrathecal Baclofen pumps.

The injections of Botox, which is a protein complex, are done either instead of the surgery or in conjunction with it, she says.

Northwest Medical Rehabilitation, which is located at 1315 N. Division and employs 15 people, works with about 220 patients on an ongoing basis who have received a baclofen pump, Botox injections, or both, Stanek says.

She says the use of the implantable pump or combination of the pump and Botox injections is done only in patients with more severe degrees of spasticity, while Botox alone is used for about half of the spasticity patients she sees.

Baclofen pumps, which are round, about the size of a tape measure, made of titanium, and battery operated, were first implanted in patients to combat spasticity in 1988, though modern pumps that could provide a more constant flow of medicine were first commercialized in 2000.

Botox, a purified protein complex derived from bacteria, was used in cosmetic surgery before the U.S. Food and Drug Administration approved it to help control certain types of spasticity as well, in 2000, says Allergan Inc., its Irvine, Calif.-based manufacturer.

Stanek says it’s likely that many more spasticity patients here would benefit from a baclofen pump or Botox treatments if they knew they were available.

“If more people were to use these tools to treat spasticity, it would decrease the overall cost of treatment and significantly improve their quality of life,” she says.

Although most insurance companies cover both treatments today, they are expensive, Stanek says. The cost of implanting a baclofen pump, including the surgery, $10,000 price of the device, and follow-up care, is about $26,000, she says.

The Botox injections can cost as much as $4,200 for a three-month dosage, Stanek says. Patients receive up to four injections in a single muscle, and up to 20 injections at a time if they have spasms in multiple muscles, she says.

The surgery to implant a baclofen pump typically takes one to two hours and requires a six-inch incision in the patient’s abdomen, where the pump is implanted. Surgeons also must make a two-inch incision in the patient’s lower back, where a Catheter is placed into the intrathecal space around the spinal cord to administer the drug there. The other end of the catheter then is maneuvered through the body so that it can be connected with the pump, which supplies the drug to the fluid around the spinal cord.

Stanek doesn’t perform the surgical procedure. She refers patients to one of only a handful of Inland Northwest surgeons who do it. She says patients typically spend one night in a hospital following the procedure.

The device pumps the liquid form of baclofen, called Lioresal Intrathecal, through the catheter into the fluid surrounding the spinal cord, where it blocks neurotransmitters from triggering muscle contractions. Dispensed in this manner, the drug is about 1,000 times less concentrated than the oral doses used years ago to control Spasticity, says Stanek. Those earlier, oral doses made their way into the patient’s bloodstream, and there was no guarantee that enough of the drug would end up where it was needed, she says.

“This system works a lot better with a lot fewer side effects,” such as drowsiness and nausea, she says. She adds, “The pumps work a lot better in the lower extremities because the heavy molecular weight of the baclofen has a tendency to pull it down in the body.”

After the implantation procedure, pumps can be adjusted telemetrically until the therapeutic dose of medicine to be released continuously into that patient’s spinal fluid is determined, she says. That amount varies with each patient. Every 60 to 90 days, a needle filled with the drug is inserted through the patient’s skin into a special port in the baclofen pump to refill the pump’s reservoir, says Stanek.

Baclofen pumps typically are replaced every five to seven years, when their batteries run out, she says.

Patients with baclofen pumps are warned about the importance of keeping all refill appointments because any abrupt stoppage of Lioresal Intrathecal can result in serious medical problems, says Allergan.

Stanek says about 40 percent of patients treated at Northwest Medical Rehabilitation receive both baclofen pumps and injections of Botox.

Stanek commonly injects Botox directly into muscles that are susceptible to spasms or tensing up, and it usually stays confined to those muscles, she says.

Allergan’s promotional material says Botox’s impact on spasticity revolves around the protein complex’s ability to influence the substance acetylcholine, which typically transmits messages from nerves to muscles that make muscles contract and move.

Too much acetylcholine causes spasticity problems, whether they’re spasms or tensed-up muscles, the pharmaceutical company says. Botox blocks nerves from releasing acetylcholine, thus relieving at least some symptoms of spasticity, it says.