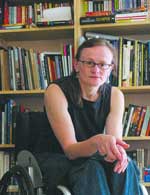 ON October 4, a letter will arrive at the White House that President George W. Bush may not care to open. The letter, circulated to government leaders around the world, will begin,

Imagine if tomorrow, through no fault of your own and without any warning, you suffer an injury to your spinal cord. Do you understand how much your body and your life will be forever devastated? Paralysis will strike you down so that you can no longer move, no longer feel, nor control the internal organs of your body -– bowel, bladder, and sexual feelings. They all disappear.

You may even lose the ability to breathe on your own. It is quite likely you will lose your hand function and be unable to carry out the basic tasks of eating, dressing, or simply caressing the ones you love …

Think about this, because this is the reality of spinal cord Injury.”

The letter from Stepnow (Stand Together to End Paralysis Now!) will explain that scientists are making inroads on a cure for paralysis. Significant progress has been reported in stem cell research and for this reason Stepnow, a grassroots advocacy group for victims of paralysis, wants governments to invest more funding in the hope that “science will transform the lives of hundreds of thousands of men, women and children.”

“Why,” concludes the letter, “should they face a lifetime of paralysis when a cure is so close?”

Dubliner Barbara Carlile, 51, set up Stepnow in April this year. She has no memory of the accident that changed her life and can only recall being a pillion passenger on her husband Flori’s Yamaha motorbike.

“It was a beautiful spring day, a Sunday morning in March,” says Barbara, piecing it all together six years later.

“We were living in Manorhamilton, Co. Leitrim and were on our way to a country market near Swanlinbar in Fermanagh, just 10 miles away.”

She could feel the breeze, smell the freshness. She never saw the car that hit them, never heard Flori’s swerve to avoid it or felt the vertebral snap of impact.

And then, silence. Darkness.

When she awoke days later in Belfast’s Royal Victoria Hospital she was confused by the unfamiliar surroundings and wondered at first whether she was alive or dead. Comforted by the sight of her brother Paul and sister Sally at her bedside, she stabilized by the end of the week.

Then her surgeon broke the news.

“He said, ‘There is no chance you are going to walk again. You’re paralyzed from the chest down so what we need to do is build up your strength.’”

Born the third child in a family of seven, Barbara grew up in Monkstown on Dublin’s Southside. After leaving school she lived in Amsterdam, developing a career in art and sculpture before moving to New York where she worked in a Manhattan art gallery.

She met Flori and they married at City Hall in New York, deciding to return to Ireland in 1999. After a spell in Co. Kerry they moved to Co. Leitrim where there was a growing artistic community.

Her injuries left her with respiratory and metabolic complications exacerbated by a damp Irish climate. With little prospect of ever returning to work the couple’s financial situation was leavened somewhat by an insurance settlement that provided some degree of independence.

They decided to start over by moving to sunnier climes in France, eventually finding a farmhouse for sale near the Pyrenees.

Flori recovered well from his leg injuries and despite bouts of melancholy Barbara feels she has adjusted to circumstance.

It has been a difficult period as her father Harry Carlile passed away soon after the accident. And last year Barbara’s mother May finally succumbed after living through the nightmare of Alzheimer’s for 18 years.

The experience of enduring her mother’s illness galvanized Barbara’s resolve to do something about her own situation. “When you are in hospital or rehab, it’s pretty much drummed into you that this is it, get used to life in the chair because you won’t walk again. I think it induces a certain passivity. I went through it myself and it takes something to break out of it.”

Using the internet she began to investigate current medical research on spinal cord injury. The notion of a cure, cursorily dismissed, began to take root.

The upshot was Stepnow (www.stepnow.org/index.html), an internet-based activist group for people living with spinal cord injury.

“I wanted the site to focus specifically in on a cure,” she says. “To raise awareness and to get governments to put more money into research on spinal cord injury. Government funding policies affect people’s lives. Part of Stepnow is to get our voice heard.”

What began in Barbara and Flori’s living room on April 4 now embraces over 40 countries. E-mails coursed to their farmhouse from Russia, Puerto Rico, Norway and Cuba, an Internet church for many who had long felt excommunicated.

“Sometimes I get quite emotional about this,” says Barbara. “If you’re paralyzed you live in your own world a lot of the time, and this just blasted that wide open. You know what all these people are going through but everybody is just getting on with it.

“Actually I would consider myself one of the lucky ones. I can use my arms and hands and breathe on my own. A lot of others can’t do that.”

“I thought Stepnow was a great idea and I really wanted to get involved,” he says enthusiastically. “The idea of everyone in the world who has a spinal injury coming together is something that can make an impact.”

Stem cell research offers the main hope for treating paralysis. Stem cells — whether umbilical, fetal, embryonic or found in the bone marrow of adults — have the capacity to regenerate and replace damaged cells.

“They are like our repair unit,” explains Barbara. “The embryonic stem cell has the potential to grow into any type of specialized cell. We don’t see this as a battle between embryonic or adult stem cells. The point is that research needs funding for both.”

Many members of Stepnow argue that the issue is plagued by misrepresentation. Embryonic stem cell research is illegal in Ireland and President Bush has vetoed federal funding in the field.

“What we’re actually talking about are unused embryos from IVF clinics – about 350,000 embryos are discarded annually in the U.S. They have no potential for life and are thrown away. Of course research needs to be regulated, but the information that can be got from this could change the face of medicine.”

“People do associate embryonic stem cells with abortion but that’s just ignorance,” agrees Harte, who feels research should proceed as a matter of urgency.

“It is going to happen,” he insists. “We have to do what we can to move that along.”

For Barbara Carlile the important thing is to clear the plaintive fog surrounding stem cells. With a global mailing campaign on October 4 the group’s founder feels that the Bush administration needs be challenged.

“The last poll taken indicates that 58% of the American population supports embryonic stem cell research,” she points out. “All Stepnow members in the U.S. would like to see the veto overturned.

“As far as ‘killing’ embryos, these same embyros are already destined for the trash, so how pro-life is that? To save an embryo from research for life-saving cures, so that it can be discarded — does that make sense?

“My motivation for getting behind this is not really for myself. Sometimes I think it’s a kind of tribute to my mother and her struggle with Alzheimer’s. This is the kind of thing she would have done if she was able –- it’s one thing losing your body but losing your mind is another. By comparison I’m quite lucky.

“There are now an awful lot of young people ending up with high neck injuries due to car accidents. I know what it’s like I don’t want anyone else to go through it. Due to my age and additional complications I don’t really believe I will ever walk again, but what I’d like to see is that someone who wakes up in intensive care will not be told what I was told.

“Instead, someone will say to them, ‘We will get you back on your feet,’” she smiles. “That’s what I want.”