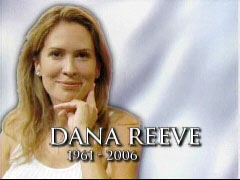 The national media was full of broken hearts last week when Dana Reeve died at 44, after nearly a decade of caring for disabled “Superman” star Christopher Reeve. It was obvious from the coverage that this woman had won hearts and made friendships in the media elite. But something strange happened in all the laudatory waves of coverage. Someone shrunk her activism.

It’s common for reporting on embryo-destroying stem cell research to leave out the embryo-destroying part. But the tear-stained accounts of Reeve’s sudden end often left out the words “stem cell” as well. This week’s Newsweek has a two-page article, largely about lung cancer, headlined “A Legacy of Love and Hope: Dana Reeve dedicated her life to finding a cure for spinal-cord injuries, only to fall victim to lung cancer.”

In this week’s Time magazine, the obituary was also vague: DIED. DANA REEVE, 44, singer, actress and widow of Superman actor Christopher Reeve who raised millions for research on treatments for paralysis after her husband became a quadriplegic after a 1995 horseback-riding accident; of lung cancer; in New York City.”

This trend happened on TV as well. On CBS, “Early Show” co-host Harry Smith on March 8: “I never saw the two of them together that I didn’t marvel at her grace, her strength, her love for him, and her determination to find a cure for spinal cord injuries…She took her dazzling smile and steely determination to Washington where she cajoled, charmed, and convinced lawmakers to make money available for research.”

On ABC’s “World News Tonight” on March 7, anchor Elizabeth Vargas hit a personal note: “When the news came this morning, it shocked even those of us who felt they had known Dana Reeve. She became a national figure when her husband, the actor Christopher Reeve, was paralyzed in a riding accident. Dana Reeve took care of the man the world knew as Superman. And took up the cause of spinal cord injury research.”

On the “NBC Nightly News” that night, anchor Brian Williams began: “Most Americans got to know Dana Reeve after her husband Christopher Reeve was paralyzed in a riding accident. From that day forward, she put everything aside to concentrate on her husband, her family and the cause that bound them all together, spinal cord injuries.”

(At least later in the story, George Lewis mentioned, “She campaigned for John Kerry in 2004 because of her opposition to the Bush administration’s restrictions on stem-cell research. She said she did it to honor her late husband. Reeve’s soundbite for Kerry: “He joined the majority of Americans in believing that the promise of embryonic stem-cell research is the key to unlock lifesaving treatments and cures.”)

National Public Radio went vague in at least two reports.On “All Things Considered” on the night of March 7, anchor Melissa Block said “She was known for her work as an advocate of research into paralysis.” On “Day by Day,” she was a “fierce advocate for those suffering from spinal-cord injuries.”

The Washington Post obit was headlined “Widow Advocated for Paralysis Research,” and it began: “Dana Reeve, 44, a singer and actress who married “Superman” actor Christopher Reeve and raised millions for medical research after her husband was almost completely paralyzed in a horse-riding accident.”

The New York Times hailed a “Devoted Caretaker and Advocate,” and began: “Dana Reeve, who devoted herself to the care of her paralyzed husband, the actor Christopher Reeve, and became a forceful advocate for research into spinal cord injuries, died on Monday at Memorial Sloan-Kettering Cancer Center in Manhattan.”

Many Americans probably saw the AP dispatch, which began: Dana Reeve, the singer-actress who married the strapping star of the “Superman” movies and then devoted herself to his care and his cause after he was paralyzed…”

No one should claim that this woman lacked a compassionate heart for her husband’s plight and disabled people as a whole. However, her advocacy of one particular, life-destroying potential cure did not mean she had located a cure, and that others simply needed to find it and fund it. She advocated one course, which could be a dead end — in more ways than the most obvious one. Mrs. Reeve was for a time the nation’s leading advocate of systematic embryo destruction. It’s odd that animal-rights folks and vegetarians can fight for chickens or try to save rabbits from testing cosmetics, but be indifferent to the fate of human embryos.

CNN’s John Roberts seemed like the exception, still baldly associating embryonic stem-cell research with medical advancement, and who needs to wait for the science? “Up until her death she carried on Christopher Reeve’s legacy as an advocate of embryonic

There were times when network anchors were more promotional of embryo destruction. Last May 9, Katie Couric interviewed Mrs. Reeve on California’s Proposition 71, and asked her: “What do you say to other people who say, ‘you know stem cell research, it makes me nervous, you shouldn’t mess with life or something that has the potential for life in a scientific way? It’s a slippery slope?'”

Reeve responded that the lives were already expendable, so why not sacrifice them for a noble cause: “Well I think that really it’s a matter of educating people, really about, I think what the central hypocrisy or difficulty is that if you support in vitro fertilization then you really should feel comfortable supporting stem cell research because in vitro fertilization requires either the egg is implanted, frozen or thrown away. All we’re saying is don’t throw them away, donate these eggs to research and they can help improve the lives of millions of people.”

Couric concluded by cheerleading: “Well Dana it’s always great to see you. I’m so happy that you’re continuing the great work that you and Chris really did together.”

To empower, to overcome