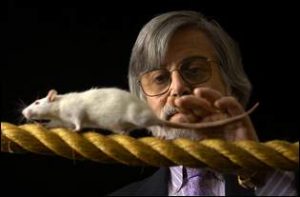 A laboratory rat unable to use its right front paw because of a spinal cord injury struggles to walk across a rope, loses its footing and falls.

Then a rat that had the same injury scurries across the rope without a problem, just weeks after an injection containing adult stem cells from a human nose that were transformed into nerve cells.

The rats are part of a line of groundbreaking research at the University of Louisville that could lead to treatments for spinal cord injuries, Multiple Sclerosis, Parkinson’s disease and other nerve disorders.

The rat’s improvement after the injection is the second major discovery in the past few months at UofL that promises progress without using embryonic stem cells.

In December, a research team at the James Graham Brown Cancer Center announced it had transformed stem cells from adult mice into brain, heart, nerve and pancreatic cells.

The nasal stem-cell research — published most recently last week in the journal “Stem Cells” — involves using certain chemicals to direct the cells to become neurons, which send and receive messages between the nervous system and other parts of the body.

“It amazes me still that we can take cells out of a human nose” and help an injured rat recover, said Fred Roisen, a neuroscientist who led the team. “I’m very optimistic.”

Experts said the research is unique.

“This one has gone a lot further than the others,” said Scott Whittemore, who is scientific director of UofL’s Kentucky Spinal Cord Injury Research Center but is not on Roisen’s research team. “This is a major step forward.”

Robert Miller, a professor of neuroscience at Case Western University in Cleveland, called the research “quite exciting.” He said many studies have involved trying to make existing cells reconnect instead of introducing new neurons that promote recovery.

The UofL researchers said clinical studies in humans could be anywhere from three to 10 years off, and any treatments wouldn’t become widely available until after that. But some people who could benefit said they are hopeful.

Kober found out she had MS in 1999 after having headaches and numbness in her arms. Over the years, the illness has left her unable to drive at night, handle more than one household chore at a time or hold a full-time job.

“Maybe in my lifetime they’ll find something that will help,” she said.

The cells the team used came from the tissue that allows people to smell.

Called the olfactory neurosensory epithelium, the tissue was taken from adults undergoing elective sinus surgery who volunteered for an endoscopic biopsy. The procedure doesn’t harm the sense of smell.

Researchers then used compounds to coax the cells into becoming neurons that attached to muscle tissue in the lab. The newly created cells can also produce Myelin, a protective coating that insulates the nervous system.

The experiments with the rats, first published in the journal “Experimental Neurology” last summer, involved giving them a spinal cord injury that prevented them from using their right front paw. A week later, some rats were injected with a biological jelly that included the stem cells, and others were injected with jelly without the cells.

Twelve weeks after the injury, rats that hadn’t gotten the cells struggled to walk across a rope and climb to the top of a clear cylinder. Researchers found that those without the cells relied almost exclusively on their left front paw, while the treated ones used both front paws.

The team immediately realized the potential of the cells.

“They can repair spinal cord injury,” said Jianping Zhou, a postdoctoral student involved in the research.

Roisen gets visibly excited when he talks about what it could eventually mean to use cells found in the nose to help people with serious diseases — and all without the threat of rejection or the need for anti-rejection drugs.

“You use the body’s own stem cells for the body,” he said.

Experts said the discovery has wide implications, not the least of which is to quell concerns about the use of embryonic stem cells.

Roisen, however, said he supports research on embryonic stem cells, and Whittemore said such research might provide an “alphabet,” or foundation, to help researchers understand adult stem cells.

Some patient advocacy groups also want both tracks of research to continue.

“These are very interesting findings and they underscore the importance of exploring all avenues of stem-cell research,” said Doug Dressman, president of the Kentucky and southeast Indiana chapter of the Multiple Sclerosis Society.

Meanwhile, Roisen and his team are moving forward with their research. They are forming a company called Rhinocyte and soon will talk with the U.S. Food and Drug Administration, a first step toward clinical trials.

John Sterner of Louisville, a 58-year-old paralyzed Vietnam veteran, said that he hopes progress comes quickly, and that many paralyzed veterans are “praying and praying” for treatments.

Alexander Speer, 62, who soon will retire as executive director of Actors Theatre of Louisville because he has Parkinson’s disease, also said he is excited about the research and would love to participate in any human trials.

“Kudos to the people who are doing the research,” Kober added. “This is an incredible breakthrough.”

By Laura Ungar
The Courier-Journal