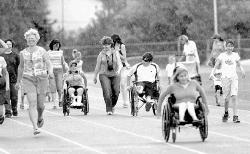 It was just as the race master yelled “go!” over the loudspeaker that a looming grey cloud opened up and dumped a torrent of fat raindrops onto people riding bikes, steering wheelchairs, running, walking and rollerblading around Griffiths Stadium on Sunday afternoon.

The downpour, which quickly created puddles all over the track, didn’t stop the approximately 100 people who turned out for Saskatoon’s third annual Rick Hansen Wheels in Motion, an event to raise awareness about spinal cord injuries and to raise money for research and assistance for persons with disabilities.

Competitive cross-country skier Kelsi Paul came to the event to push her mountain board around the track.

“It will get more funds to help people with disabilities,” the 16-year-old said. “It will help people get out more and be able to do more stuff.”

Paul has spina bifida and is a Paraplegic. She was invited to Norway last winter to train as a Paralympic hopeful for the 2010 Winter Games in Vancouver.

The mountain board she rides on is a modified wheelchair that simulates the experience of a sit ski, or a chair on skis. The athletes use them to train in the summer.

Jeff Whiting with Snobuddies, a cross-country ski club for the disabled, brought several versions of the sit ski for people at the event to see and try out.

Sitting in a seat on top of a skateboard with large rubber wheels, the rider uses ski poles and tilts her body from side to side to turn, like a skier would. But tip too far sideways, and you’ll end up in a pile on the pavement.

Others in the race ran, walked, jogged pushing children in strollers, wheeled in wheelchairs or propelled along using hand-cranked racing wheelchairs for either 2.5 or five kilometres. The participants included a mob of players from Football Saskatchewan, who circled the track in their gear before heading off for practice.

Duncan Renaut, 16, used his specialized racing chair for the event. It’s lightweight — he lifts it with one hand easily to demonstrate — low to the ground, and has an extra front wheel for stability.

The self-described sports junkie plays on both the provincial junior and senior wheelchair basketball teams and recently took up track and tennis. Partial paralysis from a Cyst on his spine three years ago hasn’t interrupted his love of sports.

Renaut raised about $200 in pledges for the event, he said.

“I love just raising money for spinal cord research and trying to figure out how to fix stuff,” he said.

“Even if it’s not to help me, there’s hope for the future. So I can help them.”

Andrea Muir, co-chair of the event and program director of Saskatchewan Wheelchair Sports said the event is all about raising funds and awareness to improve the quality of life for people with disabilities.

“To have an event like this in town is important because it’s for wheelchair sport awareness and awareness of spinal cord injuries,” she said.

This year, Wheels in Motion participants raised about $4,000, Muir said, which will be matched by their sponsor, Scotiabank.

The top fundraiser was Cathy Campbell, who raised $375.

Half the money goes to the Rick Hansen Man In Motion Foundation, which raises money for spinal cord research, school programs and an injury network.

The rest stays here, where Saskatchewan Wheelchair Sports puts together sport awareness clinics with schools and groups across the province.

“Just to let kids know, there’s lots you can do in a wheelchair,” Muir said.
© The StarPhoenix (Saskatoon) 2005

Beau Vernon became a quadriplegic at 23. He has since coached...

Help End Paralysis and Win a Trip to ‘The Office’