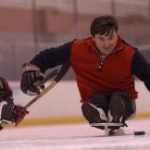 ON a Friday night, when much of Anchorage was meeting friends for a late-night drink or watching the final credits of a movie, a group of athletes met on the ice in Eagle River.

Ice time for this coed team at the McDonald Memorial Center was less than ideal. But that was the least of the obstacles it had to overcome to play a round of hockey.

Several players can’t walk on their own because of a spinal cord injury or birth defect called spina bifida. Another is missing a leg from cancer. Some have no disabilities but they like this game because it gives their arms a good workout.

They’ve all found a way to stay active by playing sled hockey. On the ice, players sit in a plastic bucket with their legs strapped down to a metal frame in front of them. They hold two shortened hockey sticks, one in each hand. One side of the stick has a blade to hit the puck. The other side has metal picks that dig into the ice to propel players down the rink.

Sled hockey was featured in the 2002 Paralympic Games, a competition for people with physical disabilities that coincided with the Winter Olympic Games in Salt Lake City. The United States took first place. Last fall, one of the lead scorers on that gold-medal team, Sylvester Flis, came to Anchorage to pull together a sled hockey team in a town that’s never had one.

“Whether you have a permanent or temporary Disability, we all benefit from exercise.”

Disability is a broad term capturing everything from paralysis to arthritis, bad joints, bad backs and problems with mobility, vision or balance, Ertel said.

People with mental and physical disabilities benefit from exercise but often encounter barriers along the way, she said. Maybe they need someone to help them in the gym or specialized equipment that can be scarce and costly. Some people with disabilities have hired personal trainers to help them use equipment in gyms. Others try adaptive equipment such as wheelchairs to play basketball, carts that take them out on the golf course or special skis that slide them down the hills.

On a recent Friday night, Mona McAleese’s daughter and niece were helping her pull on her red jersey and padding before hitting the ice for a sled hockey scrimmage. A third-grader from Chugiak dressed in soccer gear sat on a bench next to McAleese’s wheelchair, asking question after question.

“How do you play hockey like that?” asked 9-year-old Inez Klepzig, whose brother was just wrapping up a game of traditional hockey.

McAleese explained how she broke her back in a motorcycle accident, paralyzing her legs. Now she plays a sport enjoyed by her family with the help of sleds. Klepzig had never seen anything like it and asked her mother if they could stay and watch.

McAleese hit the ice along with her son, who has no physical disability but strapped himself into a sled to play with his mother.

“Both my kids play (hockey), my husband plays and all my friends play,” McAleese said. “This is something we can all go out and do together.”

“We’re equal when we all get on the ice.”

When Ertel joined Challenge Alaska more than two years ago, she couldn’t believe there was no sled hockey team here. She came from Canada, where the game has taken off. Determined to bring the sport to Anchorage, she used grant money to buy sleds. Then she hired Flis to come to Anchorage and coach a team.

When everyone hits the ice, Flis coaches a team of 11, eight of whom have a physical disability. The team has given 17-year-old Kim Kincaid her first opportunity to join a team. Kincaid cannot walk on her legs because of a car accident five years ago.

Like Kincaid, 47-year-old Tom East is playing hockey for the first time. When he was a child, his right leg was amputated to remove bone cancer.

Sled hockey isn’t just for people who can’t use their legs, however, Ertel said. Bad knees, poor balance, concerns over falling or the desire to work out could also lead a player to this sport. Frank Rothgery, an Anchorage chiropractor, plays traditional hockey several days a week. He joined the sled hockey team, however, to boost his upper arm strength. By the end of a game, his arms feel dead.

Teammates are concerned about the group’s longevity: Flis is leaving in a month to return to his sled hockey team, the Chicago Blackhawks, and Ertel is looking for a new coach. The team is looking for more members to keep scrimmaging and ideally start a league with multiple teams, perhaps some of them outside Anchorage.

Sled hockey is just one way Ertel and others can modify sports for people with disabilities.

Brian Albright oversees Challenge Alaska’s program to make golf accessible. Last summer, the group used its own money and grants to buy a $9,000 golf cart that can drive onto the green causing minimal damage to the grass, Albright said.

The cart has a canopy that raises and a seat that swivels 360 degrees. A golfer who cannot use his legs because of a spinal cord injury can strap himself into the seat. Hydraulics will then elevate the seat, putting the golfer in a supported stance allowing him to swing the club and hit the ball. The cart can be useful for others, too, Albright said, especially people who have problems with mobility, balance or fatigue.

Ertel said Challenge Alaska buys adaptive equipment for many sports to loan out. By borrowing the equipment, people can try a sport to see if they like it without first investing in costly gear, she said. Ertel, local gyms and businesses provided examples of other fitness opportunities for people with many types of disabilities.

• This spring, power lifting coaches offer weight-training classes for Special Olympics athletes Wednesday nights at the Fairview Recreation Center, 1121 E. 10th Ave. In the fall, anyone 16 and older with a disability can join the class on Wednesday nights. For more information, call 343-4247.

Benjamin Robinson, the head coach for the Special Olympics lifting program, also offers personal training to people with Multiple Sclerosis and other disabilities.

• East High School offers an adaptive swimming program for people 3 years and older with physical or mental disabilities. The program is offered from 10 a.m. to 1 p.m. Saturdays. Siblings without disabilities also can participate if there’s room in the program. For more information, call 343-4247.

• The Anchorage YMCA hosts an hourlong swimming class for people with multiple sclerosis. The free class meets from 3 to 4 p.m. Tuesdays and Thursdays and from 2 to 3 p.m. on Saturdays. For more information, call 563-1115.

• H2Oasis, an indoor water park, has opened its Lazy River three mornings a week, allowing people to walk in the river’s current. People can walk with the current, or against it. Sessions are available from 7 to 10 a.m. Tuesday, Wednesday and Thursday. The cost is $5 per walk, or a little less if multiple walks are purchased with a punch card. For more information, call 522-4420.

• Challenge Alaska has a contract with the Alaska Club to offer people with disabilities a discounted yearlong membership. If necessary, a person can bring someone along to help with the workout at no extra cost, Ertel said.

The ARC of Anchorage also has a relationship with the Alaska Club, allowing people with disabilities to bring a helper to the gym at no extra cost, said Kara Thrasher-Livingston, program director with the ARC. The ARC also has its own recreation center, where it has offered power walking, biking, hiking, dance and yoga classes. People can use ARC’s programs if they are 16 or older, have some type of disability and meet other eligibility requirements. For more information, call Thrasher-Livingston at 277-6677.

• People with disabilities also work out at other gyms, Ertel said, and Challenge Alaska’s staff has helped teach trainers how to help clientele with physical limitations.

The Dimond Athletic Center offers several specialized classes. Its Stroke Fitness class is designed for people recovering from a stroke. It’s taught in the pool from noon to 1 p.m. Monday, Wednesday and Friday. A Water Works class offers Rehabilitation in the pool, focusing on muscle-building, balance and stability. Classes are offered 11 a.m. Mondays and Wednesdays and 1 p.m. Fridays. The club also offers yoga classes, including a gentle class that focuses on stretching and breathing.

People needing rehabilitation can get a prescription from their doctor allowing them to buy a special punch card or membership that might be covered by insurance companies, the center’s managers said.