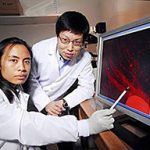 Yadong Wang, assistant professor at the Coulter Department of Biomedical Engineering of Georgia Tech and Emory University, and graduate student Christiane Gumera have developed a potentially promising strategy for encouraging the regeneration of damaged central nervous system neurons. Gumera points to a fluorescence image that indicates the presence of proteins required for nerve regeneration.

MANILA, Philippines – When Christiane Gumera left Manila in 1988 for the United States, she was a sickly child constantly having breathing difficulties. Today, she is a scientist helping a team of medical researchers develop a cure for the disabled.

She originally wanted to become a doctor but decided to pursue Chemical Engineering at the Massachusetts Institute of Technology (MIT), Minor in Biomedical Engineering to help develop solutions to medical problems.

“As a child I often suffered asthma attacks that put me to hospital,” Gumera said as she recalled her early years in the polluted environs of San Andres, Manila.

“I knew then that I wanted to make an impact — to help people,” she said.

Now pursuing her Doctorate (Ph.D.) in Biomedical Engineering at Georgia Tech, Gumera is deep into the development of polymers for the repair of damaged human tissues.

Gumera and her team led by assistant professor Yadong Wang of the Department of Biomedical Engineering at Georgia Tech and Emory University are pioneering the development of polymers for regenerating damaged central nervous system cells known as neurons.

While the human body can repair minor injuries such as small cuts, the body cannot heal a large peripheral nerve or damage to the spinal cord on its own.

Currently, there is no medical treatment that enables a person to completely recover function after a brain or spinal cord injury because the central nervous system has a very limited capability for self-repair or regeneration.

What Gumera and her team have developed is a new series of polymers that may be used to help stroke victims and others with brain or spinal chord injuries recover the use of their affected limbs.

Their plan is to insert into this polymer a molecule that would act as a transmitter which would send signals to the damaged cells, encouraging the cell to heal, regenerate and thus, regain its functions. This polymer is to be surgically implanted on the patient.

This breakthrough could potentially help in the recovery of people with nerve and spinal injuries such as those involved in vehicular accidents or injured in sports, had physical trauma or had a stroke, and give rise to the hope that people with disabilities may recover at least some use of their limbs.

Like all those engaged in pioneering work, Gumera faced many obstacles that would have daunted the fainthearted.

For starters, there was nobody there to show her the ropes or how things have been done in the past. In her case, since nobody had ever synthesized the starting materials needed to make the polymer, she had to figure out which methods to apply and which among these were the best.

At the same time, she found starting the project extremely exhilarating because it accorded her the chance to accomplish something for the very first time, of creating something new that had not existed before. This fueled her efforts to spend more and more time in the laboratory that it was not uncommon for her to be in the lab even on weekends.

How does one cope with the high-stress life medical research? Gumera said that while research can be challenging, she made sure that she has life outside the lab, too. She enjoys playing competitive tennis and is also into music, working on one or two compositions at a time.

“Right now, I am working on Chopin’s First Ballade and Mozart’s Fantasy,” she said.

It also helps that one is married to a fellow scientist, Gumera said. Her husband, Richard Cross, has a Ph.D. in Aerospace Engineering at MIT where they met.

Many gyms not fully accessible to people in wheelchairs