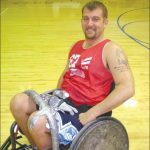 HOYLETON — As a speech therapist who works in the King City and surrounding area, Kelly Melton knows how difficult it is to overcome a disability. Now Melton is hoping her husband’s trip to China will help him further recover from a paralyzing injury with medical treatment not authorized here in the United States — umbilical cord stem cell treatment.

Chuck Melton has been paralyzed since 2002 as a result of a diving accident, when he dove into a lake and broke his neck, fracturing the C-7 vertebrae between his shoulder blades. The complete spinal cord injury left him paralyzed from the shoulders down, limiting use of his arm and hands.

At the time of his injury, Kelly Melton was five months pregnant with the couple’s third child. As most might expect, Chuck had difficulty adjusting to his situation.

“It was quite devastating,” she said. “I was pregnant and we had two children under the age of 3. The doctors said to us, ‘you need to make the best of what you got.’”

“At first it was very difficult trying to adjust to being in that situation,” he recalled. “From being independent to having people help you — that tends to be emotionally hard on you.”

But the Meltons refused to give up.

“None of the doctors offered us hope,” Kelly explained. “We took it upon ourselves to see what other people were doing with spinal cord injuries.”

“Ever since my accident, I’ve been researching all kinds of stem cell treatment,” Chuck said. “I found out that China had been doing [stem cell treatment] for a number of years and experimenting with treatments and results. So I contacted [people in China] and talked to doctors and patients and got a lot of great feedback from it.”

Five years after Chuck’s paralyzing injury, the couple decided to send him to China for umbilical cord stem cell treatment.

“We decided to take a leap of faith and send him and see what happened,” Kelly said. “We figured we didn’t have anything to lose.”

In January 2007, Chuck and his father Rickie Melton made the 20-hour airplane trip to China where Chuck received a series of stem cell injections directly into his spinal cord where he was injured. Within 24 hours, his body reacted to the injections.

“The spinal cord controls the body’s temperature and its ability to regulate temperature. Because of his injury, Chuck couldn’t sweat. Anything above 85 degrees outside, he couldn’t function, so he couldn’t attend [our kids’] soccer games for fear he would pass out from heat stroke,” Kelly noted. “He actually started to sweat after the first injection.”

In addition to the stem cell treatments, Chuck also received acupuncture with electrical stimulation and was given Chinese herbs.

“The doctors in China were impressed by his willingness to participate in physical therapy,” Kelly said. “He was willing to do basically everything. A lot of people that go [over there] may think they’re going for a miracle cure, but he really worked hard in therapy.”

Chuck says he believes he has made an improvement since his first treatment over a year ago as his kidneys and bladder are a lot stronger and his breathing and lung function is better. He also has more sensation in his legs and says he can tell when “they’re hot and cold.” Now another trip for him to China in May has been planned so he can receive more umbilical cord stem cell injections.

“It’s been a big boost in morale,” he said. “It’s all the more reason I want to go back to see what possibly could come out of that.”

“We’re hoping he can gain more bowel and bladder control and functions,” Kelly added. “We’re not looking for him to walk again per se, but if we can improve his quality of life and give him some independence, then it will be worth it.”

In an effort to help the family offset the $30,000 cost of the trip for Chuck and his father — which includes treatment, air fare and 30 days in a hospital — a benefit raffle has been organized. Tickets are $20 for a chance to win four major prizes: a Bad Boy Buggy, a Toshiba 42-inch high definition television, a Touring 150 Deluxe Scooter and a Dell Vostro A860 Laptop.

Chuck says his goal is to accomplish as much as possible through stem cell treatment.

“More abdominal strength, kidneys and lungs and maybe even walking one day, who knows?” he said. “But I don’t expect to come out walking. It’s a slow process. Any gain in mobility or function is a plus in my mind.”

The Meltons’ children, Blake, 9, Bailey, 7, and Allison, 6, have also gotten used to seeing their dad in a wheelchair, a fact that has been difficult for Chuck.

“I’ve adjusted to not being able to do things with the kids. I can still kind of throw a ball around with my son — but it’s hard to teach them how to ride a bike and it’s hard to ask other people to help with that,” he said.

One day he hopes stem cell treatment will be available to others like him here in this country.

“I think [lawmakers] are focusing on the wrong thing — on embryonic instead of umbilical cord,” he said. “I think they should seriously consider what China and others have done. I know there’s a lot of skepticism, but they need to focus on the healing process and the problem itself, as opposed to trying to clone another person.”

Drawing for the raffle tickets will be held March 28 at the Moose in Nashville. You do not need to be present to win. To purchase tickets or for more information, you may call 231-5558.