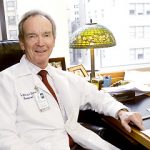 Dr. Ragnarsson is a physiatrist (specialist in physical medicine and rehabilitation) and professor and chairman of the Department of Rehabilitation Medicine at Mount Sinai. Since 1971, he has been treating patients with physical disability. He oversees the treatment of almost 2,000 patients admitted each year with new disability which may be the result of spinal cord or brain injury, stroke or amputation.

Spinal cord injuries (SCI) are a fairly common problem in the United States, with 250,000 Americans currently living with SCI. It may be caused by trauma, like motor vehicle crashes, falls, sports injuries or violence, or medical conditions, like tumors, arthritis, or vascular problems. People can injure their spinal cords at any age, but SCIs are most common in the young and the old. “The young ones are more likely to be risk-takers,” explains Ragnarsson, “while the elderly may have balance disorders and sustain a fall.” In the case of trauma, SCIs are four times more common in men than women. “That difference is particularly noticeable in the young,” says Ragnarsson, “because of their risk-taking activities.”

Signs and symptoms:
Paralysis is the most unmistakable sign of SCI, but it isn’t the only one. Other signs include sensory loss, involuntary motions in the limbs, and loss of bladder, bowel and sexual function. “Pain is commonly associated with SCI,” says Ragnarsson, “as are skin pressure sores in the areas of the body where there’s no sensation, particularly around the tailbone and buttocks.”

“Mild symptoms may be underdiagnosed,” says Ragnarsson, “Fortunately, with proper diagnostic testing, you can usually find out if there is spinal cord damage.”

Traditional treatment:
SCI is a major injury that usually requires surgery initially, followed by intensive rehabilitation. “Most people with SCI undergo surgery acutely to achieve relief of pressure on the spinal cord,” says Ragnarsson. “If the bones are broken, they get a spinal fusion as well.”

After surgery, most patients spend between one and three months at an inpatient rehab center. “SCI rehab should not be done in isolation,” says Ragnarsson, “Patients report that they learn so much from each other and support each other.”

A good rehab team will include physical and occupational therapists, rehab nurses, psychologists, social workers, recreational therapists, and vocational counselors. “The early treatment is focused on fully restoring the maximum function that can be achieved within the limitation of the paralysis,” says Ragnarsson.

“We help to make them as self-sufficient as possible, and as mobile as possible.” In some cases, patients may be able to walk with braces or crutches; but in most cases, they will need wheelchairs, which can be either manually or electrically powered.

Currently, there is no cure for SCI, but the right rehab can help patients regain good health, self sufficiency and mobility.

“We can help these folks to become healthy again, even if they are disabled,” says Ragnarsson, “They usually live at home, become actively involved in the community and assume their former family roles.”

Research breakthroughs:
The treatment of SCI has improved drastically in the past 50 years. Not only has life expectancy increased, but doctors can manage much better many of the associated conditions. For instance, “spasticity in the paralyzed legs can be treated with effective medications, sexual function can be improved with medications like Viagra, and male fertility has increased” says Ragnarsson.

Technological advances have been a huge boon to patients paralyzed as a result of SCI. Thanks to technology, “people can work at home using computers, and get power wheelchairs that go up steps,” says Ragnarsson, “For some, electrostimulation of paralyzed muscles can restore a degree of hand function, help them to stand up and take a few steps, to breathe without a ventilator, and control bladder and bowel evacuations.”

The next step is looking for ways to reverse the neurological damage of SCI. “There are laboratory experiments in which animals with SCI have regained some neurological function,” says Ragnarsson, “Unfortunately, we don’t know yet if these will work in humans.”

Questions for your doctor:
After SCI, it’s essential to receive both acute care and rehabilitation at centers with experienced doctors, nurses and therapists, such as at a federally designated SCI Model System of Care. After acute SCI care, ask, “Are you aware of any SCI trials approved by the FDA that I could participate in?”

Post-surgery, the next step is finding the best rehab, so ask, “What is the specialized SCI rehab center in this region?” There’s no cure for SCI, but most can still enjoy a good quality of life, says Ragnarsson, “You can be in good health, if you get good care.”

What you can do:
The best treatment is prevention.

Motor vehicle crashes and sports are two of the most common causes of trauma. “In sports, it is important to play by the rules, use the proper equipment, and know the environment and your limitations,” says Ragnarsson.

Dive carefully, know the depth of a pool before you dive in.
“Even better, go feet first,” says Ragnarsson. “If your balance is impaired, take precautions to avoid falls”.

250,000 Americans are living with a spinal cord injury

How Travis Roy Rebuilt After a Tragic Hockey Injury