Directing Objects With Your Mind 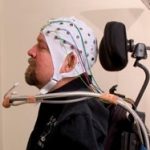 Imagine being able to look at a light, think about turning it on, and it comes on without you moving. Or picture, with just a thoughtful wish, being able to control a computer or open a door. Now envision directing and controlling all manner of inanimate objects with your mind. It would be great fun and potentially very helpful in our multi-tasking world, but consider how it would transform the existence for a person who has lost all motor function due to spinal cord or brain damage. What if there were a technology that allowed people with severe disabilities to communicate, guide robotic limbs, and control the environment around them? This is not just science fiction, but the vision driving the development of brain-computer interfaces or BCI.

BCI is an emerging field of study that has attracted increasing media attention. Essentially, it is any technology that connects machines or computers to the thoughts emanating from your brain. Each and every one of your thoughts involves the activation of specific sets of neurons, which generate a minute amount of electrical activity that can be detected by a sensor array sitting on top of the scalp. Each distinctive pattern of impulses can be used to control a specific device to which it is linked via a wireless transmitter. And no, BCI is not designed to read people’s thoughts. It is not possible to read someone’s thoughts without their cooperation.

UBC and Neil Squire Society researchers of the Brain Computer Interface Lab at ICORD, an interdisciplinary research centre for the development of effective strategies to promote functional recovery and improved quality of life after spinal cord injury, have been collaborating to develop BCI technologies and applications. There have been some promising results, both here at UBC and abroad, where people have been trained to control lights and doors, move a computer mouse, type messages, and direct a wheelchair.

There are still many challenges to delivering a working prototype. Ideally a practical BCI must be easy to wear or implant, be unobtrusive, and not require a long training period. In the not too distant future, BCI will revolutionize the lives of people living with a physical challenge. The technology will profoundly change the lives of people with severe disabilities, and may also revolutionize how we interact with machines.