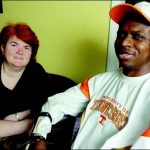 McKENZIE – It may be a long shot, but Craig and Sheila Willis believe it’s worth taking for the chance that he might one day walk again.

An all-terrain vehicle accident last June injured Craig Willis’ spinal cord and has left him paralyzed. They’re headed Feb. 27 to the 463 Hospital in Shenyang, China, where Craig will get the stem cell treatment he can’t get in this country.

“It’s kind of hard to put a price on the quality of life,” Craig said.

He sat Thursday in a motorized wheelchair in the living room of their McKenzie home, his wife at his side. Initially, he was only able to use his left arm. But now he can use both since coming home from the hospital in late August and starting Physical Therapy in Milan.

His goal is to return to his job at UGN in Jackson, where he was a senior production coordinator. His wife described the father of three sons as a workaholic who loved his job and would tell people his hobby was work.

“I just want to take care of my family,” said Craig, 39. “I’m not looking for a hand-out. I just want to work and earn it like everybody else.”
Stem cell research

Stem cells are unspecialized cells that have the potential to develop into many different cells in the body, according to the National Institutes of Health’s Web site. Scientists believe stem cells may be used to replace damage cells in the body and that someday they may be used to treat illnesses such as Parkinson’s disease, diabetes and heart disease.

Stem cell research is controversial because it can involve stem cells from aborted fetuses or human embryos. But the Willises believe the stem cells that will be used to treat Craig more than likely will come from umbilical cords.

“We’re not going to harm another life for my own,” Craig said.

Stem cell treatment for spinal injuries is not available in the United States. It has not been approved by the U.S. Food and Drug Administration, explained Dr. Michael Jones, vice president for research and technology at the Atlanta-based Shepherd Center.

Craig was treated for his injuries at Shepherd. The center specializes “in the treatment of people with spinal cord injuries, acquired brain injuries, Multiple Sclerosis and other neurological conditions,” according to its Web site.

Stem cell treatment has not been approved in this country because “treatments have not been proven to be of any scientific benefit,” Jones said. He added that the Shepherd Center generally does not recommend such treatment.

The treatment is being done in a number of countries where it does not have to go through “the same level of scientific scrutiny to verify it’s effective” as do drugs and treatments in the U.S., Jones said. But there’s “no guarantees of any return of function,” he added.

“I know of no cases where someone has had a substantial recovery,” Jones said. “I’ve not heard about anyone that’s been able to walk again.”

Still, the Willises remain hopeful. They’ve been in touch with families who have undergone the same treatment at the same Chinese hospital where Craig will be treated, they said.

“Everybody we talk to has had some form of recovery,” said Sheila, 40. “No one regrets their decision to go, and they all say they’d return again.”
Life-changing moment

The Willises have been married 12 years. Sheila is a CNA nurse specializing in hospice care giving.

Their lives changed June 12 when a deer suddenly jumped in front of the ATV Craig was riding. He’d taken a drive to cool off during a break from cleaning the garage.

He was airlifted to the Jackson-Madison County General Hospital, where he spent a week in the Intensive Care Unit. He was then transported to Atlanta for treatment at the Shepherd Center.

The couple learned of the stem cell treatment being done in China, and Sheila started looking into it as a possibility for Craig. People considering such treatment overseas need to be “diligent” in their research because some options are scams, Sheila said.

They believe it was “God’s hand” that Craig was accepted at the Chinese hospital where he’ll be treated. Usually, there’s a two-year waiting list to be accepted there, Sheila said. They used to want patients to be one-year post injury for the program.

Sheila recalled that one woman wished them the best but said she didn’t believe in stem cell treatment. The woman admitted she didn’t know much about it, though.

“Maybe, that’s what our mission is now … just to kind of educate people,” Sheila said.
The controversy

Some stem cells being used in research today in the U.S. come from human embryos donated by in vitro fertilization labs with the donor’s consent, the NIH Web site said. They are embryos that were created for infertility purposes but that are no longer needed.

“They are not derived from eggs fertilized in a woman’s body,” the Web site stressed.

Moral objections have limited federal funding for stem cell research using human embryos. However, individual states can pass laws allowing the use of state funds for the research, the NIH Web site said.

Researchers also are working with “adult stem cells.” These have been reported to have been found in the “brain, bone marrow, Peripheral blood, blood vessels, skeletal muscle, skin and liver,” according the NIH.

These cells remain quiescent, or non-dividing, in a certain area of each tissue until they are triggered by an injury or tissue damage, the Web site said.

Information the Willises received from the Chinese hospital’s Web site explained how stem cells are used from umbilical cords. The umbilical cord is detached after the birth of a baby, and a needle is inserted in the vein of the cord to withdraw the placenta blood.

The couple said they wouldn’t do the procedure if it involved using stem cells from aborted fetuses. Fetuses are being used in some research in the United States.

The Associated Press reported in December on a surgery in November in which doctors in Portland, Ore., transplanted stem cells from aborted fetuses into a 6-year-old California boy’s brain.

It was done in an effort to reverse or slow the progression of a rare genetic disorder, known as Batten disease, an incurable condition that normally results in blindness and paralysis before death. The boy, Daniel Kerner, was the first volunteer in an experiment that will involve the same surgery on five more children with the same disease in the next year.

Daniel had lost the ability to walk and talk, but his father, Marcus Kerner, told the Associated Press he’d called him “Dad” for the first time in two years since the surgery. Women aborting early-stage pregnancies donated the fetuses being used in the experiment to a nonprofit medical foundation.

President Reagan had banned federal funding of research using stem cells from aborted fetuses in 1988, but President Clinton lifted that ban in 1993.
A long journey

Craig will receive one of two types of treatment. Tests will be done in China to determine which one he gets.

They’re asking for prayers from the faith community as they get ready for their trip, which will involve a 19-hour flight from Chicago to China.

Sheila said Craig has remained positive throughout the ordeal, never grumbling or complaining. He has an extraordinary determination.

“It’s hard to beat a person who refuses to quit,” Craig said. “I refuse to quit …

“I’m just convinced that it’s going to work out all right,” he said of the stem cell treatment. “I have no doubt.”

By TONYA SMITH-KING
The Associated Press Contributed to this story.

Paralympians get chance behind the wheel of a NASCAR Cup car...