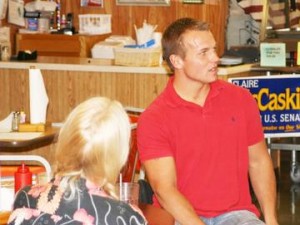 CAMPBELL, Mo. — On November 7, voters will cast their vote either for or against the Stem Cell Research and Cures Initiative, otherwise known in Missouri as Amendment 2.

Stem cells could provide cures for diseases and injuries that afflict hundreds of thousands of Missouri children and adults and millions of other Americans including diabetes, Parkinson’s, cancer, heart disease, ALS, sickle cell disease and spinal cord injury.

That’s the key issue that led a coalition of patient and medical groups to develop the Missouri Stem Cell Research and Cures Initiative, a voter referendum measure proposed for the November 2006 statewide ballot.

Bader, 24, is just one of the many Missourians who could benefit from stem cell research.

“I was in a car accident nearly five and one-half years ago which left me paralyzed,” Bader said.

Bader went back in time to when he first became Paraplegic and spoke out about his experiences.

“I’ve been to California and I lived in Cincinatti, Ohio for about eight months at a clinic that specialized in spinal cord injuries,” Bader said. “In the time I was there I saw some improvements in my muscle tone but there was no sign of feeling.”

Bader said he knows if there is a chance of him ever walking again, it will come from stem cell research and a lot of prayer.

“There are over 70 different kinds of diseases stem cell research could possibly help,” Bader said, adding that, “unfortunately, some politicians in Jefferson City are trying to pass state laws that would ban and criminalize important types of stem cell research in Missouri and actually prevent Missouri patients from having access to future stem cell cures that are federally approved and available to patients in other states.”

Bader believes a state ban on any lifesaving stem cell research and cures that are allowed in our country would be unfair to Missouri patients and medical institutions. The Stem Cell Initiative will prevent such unfair bans by making it clear in our state constitution that any stem cell research and cures allowed under federal law will continue to be allowed in Missouri.

“I’m not only speaking for myself,” Bader said. “I have a wonderful family who supports me and has been there for me through the toughest of times.

“But what about the people who need this that doesn’t have family there for them,” Bader said. “What will they do?”

Bader said his family’s faith and support is what keeps him believing and drives him to keep pushing forward.

“The truth is, I could live the rest of my life in a wheelchair. “I have so much support that I know I could do that,” Bader said. “But I feel like it is my job to speak out for those who do not have the support or the opportunity to speak out.”

The Stem Cell Initiative does not create or increase any taxes. And, it does not require the state or taxpayers to fund any stem cell research. Supporters assert the Initiative will benefit our state budget and taxpayers.

By allowing Missouri medical researchers to compete on a level playing field with research institutions in other states and countries, some believe the Initiative will help keep and attract millions of dollars in research investments in our state. According to supporters of the amendment, those investments will generate more state tax revenues and quality jobs for Missouri. In addition the development of stem cell cures for costly diseases like diabetes could significantly reduce health care costs for many Missouri patients and their families, and could also help reduce state-funded Medicaid costs.