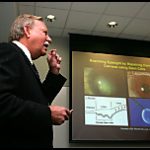 CU officials announced the Gates donation – the largest research gift in the School of Medicine’s history – Wednesday afternoon at the university’s Fitzsimons campus.

They also introduced Dennis Roop, the Baylor University biologist who will lead the effort to find cures for diseases through the new Charles C. Gates Regenerative Medicine and Stem Cell Biology Program.

“We will be a national leader. We are not now, but we will be,” said CU Chancellor M. Roy Wilson. “That’s our goal.”

The plan is to increase the amount of stem cell research already under way at the school. Currently, 20 to 30 scientists are working on treatments for Parkinson’s disease and therapeutic efforts using stem cells derived from bone marrow and umbilical cord blood.

“We will be able to build on a critical mass that’s already here,” Roop said at a news briefing.

“I’m convinced that all the things are in place to make Colorado a world leader in this new and exciting and promising field of medicine,” said Roop, currently a professor of molecular and cellular biology at the Baylor College of Medicine in Houston.

Roop will join the CU faculty Jan. 1 as the Charles C. Gates chair in stem cell biology. He will be paid about $380,000 annually, said Dr. Richard Krugman, dean of the CU School of Medicine.

“My vision is that 10 years from now, stem cells will be at the forefront of a new paradigm in medicine,” he said. “It will provide novel treatments and possible cures for victims of serious disease, including heart attack, Parkinson’s disease, spinal cord injury, childhood diabetes and cancer.”

Research at the new center will use both adult and embryonic stem cells.

Embryonic stem cells are uncommitted “master cells” that can form any body tissues. Researchers obtain those cells from leftover embryos at in-vitro fertilization clinics or from cell lines sanctioned by the federal government.

Adult stem cells normally generate only the types of tissues they are derived from – skin cells or blood cells, for example. But researchers are looking for ways to reprogram them for other uses.

Last month, President Bush used the first veto of his presidency to ax legislation that would have greatly expanded the number of embryonic stem cell lines available for federal funding. The proposal would have eliminated restrictions imposed by Bush five years ago.

In California, Gov. Arnold Schwarzenegger cited the veto when he loaned $150 million from the state’s general fund to pay for grants to stem cell scientists. In 2004, voters there approved a bond measure providing $3 billion to human embryonic stem cell experiments.

But in Colorado, the CU School of Medicine “has not enjoyed the most generous funding from the state,” Wilson said Wednesday.

“Given the financial constraints, it’s very important for us to rely on private gifts” to launch ambitious research initiatives, he said.

The $6 million gift will allow CU to acquire four other Baylor faculty members immediately, Roop said. Ten to 12 other faculty recruits also are possible, along with about 30 graduate students, he said.

Roop will bring $3.8 million in annual grants from the National Institutes of Health when he makes the move to Colorado, he said.

But can the CU School of Medicine really compete with places like Harvard, which just spent several hundred million dollars on a new building for stem cell research?

“He has as good a chance as anyone in setting up a world-class program,” said Dr. Margaret Goodell, a Baylor stem cell researcher who has known Roop for nine years.

“I think he’s a great leader, and in his years at Baylor he’s shown he’s very good at marshaling a team of people to work closely together.”

As a post-doctoral researcher, Roop worked in Dr. Stuart Yuspa’s lab at the National Cancer Institute in Bethesda, Md.

“He’s going to have a tremendous impact on the whole university by virtue of his creativity and his charisma,” Yuspa said Wednesday. “This is a terrific catch for the University of Colorado.”

His lab has identified many of the genes required for normal skin development and discovered that defects in some of those genes cause inherited skin diseases characterized by fragile skin that blisters easily and may result in neonatal death.

Roop also has provided insights into the genetic defects that lead to skin cancer. His lab showed that the accumulation of genetic defects in skin stem cells eventually results in tumor formation.

He recently discovered that skin tumors themselves are maintained by defective stem cells, referred to as cancer stem cells.

At the new CU stem cell center, researchers will continue to use embryonic stem cell lines approved by the federal government, instead of buying or trying to develop other lines.

“Our position will be to work within the current guidelines with the hope that, hopefully, within a few years, the restrictions will be lifted and more cell lines will become available,” Roop said in an interview.

“In polls, seven of 10 people favor reforming the rules to allow new lines,” he said. “I think gradually there will be a shift, and the restrictions will be relaxed.”

Who is Dennis Roop?

Named Charles C. Gates chair in stem cell biology at the University of Colorado School of Medicine at the Fitzsimons campus

Putting a protein into overdrive to heal spinal cord injuries