New Israeli patent gets a leg up 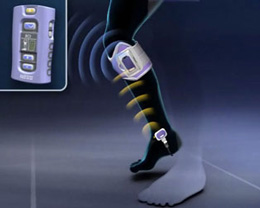 For many stroke victims, one of the most debilitating results of their condition is the paralysis of a limb.

For the thousands of Americans who have difficulty walking due to a paralyzed foot, an Israeli company may have the answer to restore their former gait.

Central Nervous System injuries often cause a gait disorder called ‘Foot Drop’ which is the inability to raise the foot while walking and therefore results in dragging of the foot, instability, and increased effort as they move. The NESS L300 is an advanced system designed to improve gait in people suffering from foot drop as a result of a central nervous system injury or disease.

The US Food and Drug Administration has just approved the sale and use of the NESS L300 system, a wireless, computer-controlled device developed by Ra’anana-based NESS, (Neuromuscular Electrical Stimulation Systems) that enables safe walking for people with a foot paralyzed due to stroke, brain injury, cerebral palsy, spinal cord injury or Multiple Sclerosis. The CE mark for use in Europe was received last month for the ailment.

“Foot drop is the paralysis of the foot. People with foot drop cannot walk freely because once they begin to lift their leg, their foot stays down. They can’t walk normally,” explained NESS CEO Shmuel Shany.

“There are two ways to accommodate foot drop in order to allow for any type of walking. The first way is to fit the patient with a stable splint, which keep the foot up all the time, but the walk would be very abnormal and awkward. The other way is to revive the patient’s natural walk – the way NESS does – which means any time the leg comes up, so does the foot.”

The NESS L300 works via electrical stimulation, and consists of three main components, Shany explained: a sensor, a microprocessor and a control unit.

The sensor in the shoe identifies the walking stage of the paralyzed foot. It then transmits a wireless signal to a microprocessor attached underneath the knee. The NESS L300 system releases a suitable and perfectly-timed electronic pulse to the nerves and muscles that activate the paralyzed foot so as to facilitate the user’s next step. The electronic stimulus replaces the nerve signal that would otherwise have arrived from the brain.

The device can be installed and operated by the patient, even is he or she also has a Disability in their arms, according to Shany.

“The control unit is very small, about the size of a cell phone. It allows the patient to control the system wirelessly – turning it on and off and changing the parameters.
One of the most important features is that while the system is very sophisticated, for the user it’s very simple. Since we’re dealing with people who have often recently suffered a stroke, we need to have a simple system that can be easily used. In addition, most people are affected in their upper limbs and their hands, so we needed to design it so it could be used by one hand, if need be,” he told ISRAEL21c.

The device was tested over a period of six months on patients undergoing treatment at the Beit Lowenstein Rehabilitation Center in Ra’anana, and Shany said that the resulting study was currently being submitted for publication in a medical journal.

“I have always believed in the capabilities of the NESS team. They are world-class professionals who have yet again managed to achieve the inconceivable, and have developed a device which will change the lives of millions,” said Moshe Tzimerman, chief financial officer of NESS’s main investor, Teuza Venture Capital Fund Group.

According to Shany, the main innovation of the NESS L300 is its wireless capacity.

“Most other solution to foot drop use the technology of electrodes and wires.
This creates two problems – you have to wire the person, and you have to rewire him every time – you need to know the exact location to put the electrodes each time. We did away with the electrodes – our orthosis is self-contained,” he said.

The NESS L300 is not the only device NESS has developed to activate paralyzed limbs. Incorporated in 1991, NESS ‘s first successful product was the NESS H200 (formerly The Handmaster) – a revolutionary non-invasive system for paralyzed hands.

The company will distribute the product in the US through a joint NESS-Alfred Mann subsidiary based in California.

“We expect to begin distribution in the second half of this year to rehab centers and to patients directly,” said Shany, adding that a main target for the device would be the 3,000 rehab centers for head injuries in the US.

According to Amit Dar, head of R& D at NESS, “The objective difficulties of the structure of the human leg posed a nearly impossible challenge for our researchers and developers, but the result is a small, elegant and efficient instrument that fits any leg and enables a paralyzed person to independently install it each morning.”

Paralysis Cure Worth Waiting For