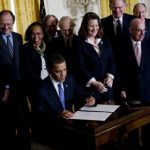 A bill that would limit stem cell research in Georgia and define a living human embryo as a person, has a good chance of coming before the state Senate for a vote Thursday.

Balfour’s committee decides which bills see the light of day in the Senate chamber. The embryo bill will go before the Senate Rules Committee Wednesday afternoon and senators will decide if it will make it onto the Senate calendar for Thursday, Balfour said.

Thursday is the deadline for a bill to pass a chamber and remain alive during this year’s session.

Senate Bill 169 defines a living human embryo as a person and prohibits the destruction of an embryo for any reason, such as scientific research. Supporters say the bill does not limit study of stem cell lines already in existence or new lines that come from out of state.

The bill would also prevent a couple who decided they no longer wanted to try to become pregnant from being able to dispose of their frozen embryos kept at a fertility clinic.

Opponents say the bill criminalizes stem cell research in Georgia and would have a chilling effect on the practice of in-vitro fertilization.

Supporters say it’s an attempt to respect life â€” even that of a 6-day-old human embryo that might have a chance to live if placed inside a woman.

Proponents of stem cell research say embryonic cells hold the potential to find cures to many serious diseases, such as diabetes, Parkinson’s disease and therapy for spinal cord injuries. The cells have the ability to morph into any kind of cell in the human body.

Obama on Monday lifted an eight-year ban on federally funded research using embryonic stem cells that was in effect under President George W. Bush. Obama said his purpose was to restore scientific integrity to government decision-making.

E. Culver “Rusty” Kidd, a lobbyist for the medical industry, told the committee he opposes the bill.

“If you shuck the corn and get down to what this bill really does, you’re defining when life starts,” Kidd said.

Critics say that places the bill squarely in the debate on abortion and when human life begins.

Right to life supporters of the bill who testified at the meeting include the Georgia Baptist Convention and the Georgia Catholic Conference. The Catholic church also opposes in-vitro fertilization.

Dan Becker, president of Georgia Right to Life, argued that the bill would protect life from its earliest moment. “No one’s right for a cure supercedes another’s right to life,” he said.

Nancy Stith, executive director of Georgia Right to Life, said the fact the bill came out of committee on the same day the president lifted restrictions on stem cell research was a coincidence.

“It would embarrass the state,” Craig said. Georgia is trying to use an international biotech convention in Atlanta in May to showcase the state as a good place to do biotechnology business.

Kenneth Stewart, commissioner of the Georgia Department of Economic Development, listened to the committee debate but did not offer an opinion. All he would say was that during the upcoming biotech convention, “The eyes of the world are going to be on Georgia.”

Tom Daniel, senior vice chancellor for the Board of Regents of the University System of Georgia, said the university system opposes the bill. “We’re concerned it would have a damaging effect on research being done now and our ability to successfully do that in the future,” he said.

Sen. David Adelman (D-Decatur) spoke against the bill, saying it addresses an area that is too complicated and controversial for a vote after only a few days of deliberation. “I’m concerned that Georgia is putting politics ahead of science,” he said. “We’ll send an unmistakable message that Georgia is an anti-science state,” he said.

Senate Bill 169 was first introduced as a bill that would prohibit another “octuplet mom” like the recent case of a California woman who gave birth to eight babies through in-vitro fertilization.

While many of the controversial provisions restricting in-vitro fertilization techniques were removed from the bill, the legislation would radically change the way clinics operate, said Dr. Andrew Toledo, a reproductive endocrinologist.

The bill would prohibit couples from donating their embryos to science or discarding them. It would place patients in an uncertain situation, paying about $500 per year to preserve embryos they no longer need, Toledo said.