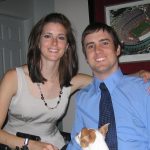 Three years ago, when the family appeared publicly for the first time since Tyson Gentry’s spinal cord injury, Bob Gentry said something that has resonated with me ever since.

Someone asked Bob, a father of three, what his family learned from each other through such a trying ordeal.

“Our strength as a family is kind of tough to beat,” Bob said. “We didn’t have to say, ‘Geez, I wish we’d have done this’ or ‘Why didn’t we think of that?’ We didn’t have regrets of any kind. That’s not us as a family.”

This is a story of that strength. Remarkably, Tyson is on target to graduate in June with a degree in speech pathology. It took him five years — the same time it takes most college students to complete a bachelor’s degree these days. Only Tyson did it while battling a fractured vertebra and paralysis.

Without his sister, Ashley, and his father, Bob, he never would have made it this far. This is his story through their eyes.

Ashley and Tyson Gentry have never shared the normal brother/sister relationship because, well, they never hated each other.

Only a year and a half apart, Ashley and Tyson were inseparable as kids. And adults.

“They’ve always been joined at the hip,” Bob says. “They played out in the woods chasing crawdads and frogs and did all the little things typical little kids do together. That grew into golfing together and shopping and just being together all the time.”

When it was time for college, the decision was simple. Tyson was asked to be a preferred walk-on at Ohio State. He never had unrealistic dreams of being a star, he just wanted to follow his father and play for the Buckeyes. Ashley was already a student at Capital. The two would live together, along with two other of Tyson’s high school buddies.

Tyson was paralyzed in April of 2006, and Ashley graduated in May. That should have meant the start of her professional career, but she wasn’t about to leave her brother.

“I was going to do whatever I had to do to be there for him and get him through things,” Ashley said. “When it comes down to it, I’d hope a lot of people would do the same thing I did. Everything was in place. I didn’t have any attachments I couldn’t break.

“It’s nothing he wouldn’t do for me.”

The two have since purchased a house near Columbus. Ashley is taking nursing classes at Mount Carmel, while Tyson will head for graduate school at Ohio State. “It’s remarkable what he’s been able to do,” Ashley said. “He didn’t miss any quarters.”

They still quibble and fight over “typical brother/sister stuff,” Tyson says. But their strength and love is unquestioned.

Ashley attended every Ohio State home game, watched as Tyson addressed the Skull Session inside St. John Arena before the Michigan game and cheered when he was the last player announced on Senior Day.

Typically, that position is reserved for the MVP of the senior class. But this time, James Laurinaitis was second-to-last. Gentry received the final ovation.

There is this place in Bob Gentry’s soul. He calls it the “black box.” It’s where he goes when he wants to grieve his son’s accident. But that box isn’t opened very often. Bob learned very quickly it doesn’t do any good.

“That doesn’t pay any dividends,” he said. “How do you want to handle life? Do you want to be a builder or a wrecker? I want to build things.”

Don’t mistake his lack of self pity for a lack of pain. His heart surely hurts every day, if for no other reason than watching what his only son has endured over the last three years.

“This is a strange way for me to put it, but if you only knew what our day consisted of,” Bob said. “But I don’t ever want you to know what it’s like. I won’t say I wouldn’t want to change it, but this is what we have to do every day. This is what our daily routine consists of.”

Rehab, hope, more rehab and the occasional down day. Through it all, though, no one in the family has ever questioned God or fate as to “Why me?”

Whether it be home games or bowl games, wherever Tyson is, Bob is close behind. He is still a middle school teacher at Perkins, but he drives to Columbus every Tuesday and Thursday to shower Tyson and give Ashley a break.

Ashley fights with her father not to come on Thursdays, particularly since he and wife Gloria are typically back down on the weekends, but Bob insists.

“Driving is therapeutic for me,” he says. “I enjoy the darkness of the morning or the night.”

Some Thursdays Bob just stays with his kids, then awakens in the early morning to drive to school. He and Gloria are used to life on the road. He added up the mileage they drove just following Ashley around during her volleyball career at Capital: 24,000 miles. Prior to that, the family was always in Columbus to watch oldest daughter Natalie compete in the high jump at Ohio State.

“We’re down there so much anyhow,” Bob says, “that part of it hasn’t really changed.”

Like any father, Bob has hopes and dreams of his children finding love and happiness. Perhaps it’s natural to think Tyson would have a harder time finding that now, but Bob doesn’t think so. He knows the character of his son, the drive he possesses and knows how appealing that will be to the right woman.

Tyson, in fact, has a girlfriend. They met shortly before the Buckeyes faced Texas in the Fiesta Bowl and have been dating ever since.

“I look at Ty’s character and the type of person he is, believing he is going to walk again, believing he’s going to contribute to the world around him, and I don’t think that would ever be an issue,” Bob said. “I think there’s someone who would just gravitate to his kind of character and passion that he carries.”

The darkness of the early days following the injury have been replaced by the joy of watching Tyson accomplish so much. Earlier this month, he earned his first letter for football. He was awarded his letterman’s jacket by Jim Tressel. He had a team award named after him, the Tyson Gentry Courage Award, which fittingly this year went to quarterbacks coach Joe Daniels for his well-documented fight with cancer.

So much accomplished, so much more work to do.

Shortly after the accident, as the family was still gathering the facts and statistics regarding spinal cord injuries, Bob pulled aside a young doctor and reprimanded him for speaking to Tyson in absolutes.

The fact it has been three years, and Tyson still can’t walk, has not diminished the family’s hope it will happen one day. There are theories that as more time passes, the less likely it is for a patient to walk again. But the Gentrys don’t waste anytime worrying about that.

“Without hope and belief, you’re done. Just cash in your chips,” Bob said. “I just know and believe that someday, there will be this great story. Here’s this kid, walking again…”