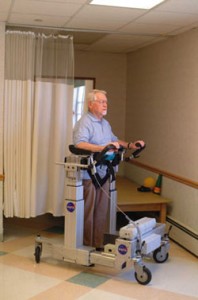 The late James Kerley created and patented the technology, consisting of short segments of flexible cable that connect to hardware, all of which allows joint-like, multidirectional movement and shock absorption. Allen Crane and Wayne Eklund teamed with Kerley in the 1990s to incorporate this “cable-compliant” system into a patented walker that supported the pelvis and imitated hip joint movement, which ultimately alleviated pain to injured patients by reducing the amount of weight placed on the legs.

In 2003, Enduro Medical Technologies, East Hartford, Conn., licensed these patented NASA technologies and modified the cable-compliant system into an advanced walker with a flexible harness that embraces the lower torso.

“We felt SAM would be an ideal fit for Walter Reed because it makes the Rehabilitation process less taxing on both the patient and the medical staff,” said Enduro’s president Ken Messier. According to Messier, SAM allows patients to stand or walk bearing various amounts of their own weight whether they have a sense of balance or not. “It allows them to stand without having three or four therapists helping them,” explained Messier. “So it gets the patient up sooner in the rehabilitation process without a fear of falling and without injuries to the patient or staff.”

According to Messier, one active military patient at Walter Reed who was wheelchair-bound for two years due to a spinal cord injury is now up and walking with SAM. “When we first put him in the walker, he was up and going for 25 minutes,” explained Messier. “He’s now walking for up to 25 minutes every day and even using SAM to perform exercises to strengthen his leg muscles.”

Former Army sergeant Herbert Geddis of Springfield, Va., used the SAM walker at Walter Reed as an integral part of his recovery from Neurosarcoid, a rare disease that afflicted his spine, taking away all of his lower body muscle strength. The condition, which developed after his military service, caused his knees to buckle during physical therapy.

“The SAM walker prevented my knees from buckling and helped me regain my mobility. I was able to graduate to the therapy on the parallel bars a lot quicker as a result,” said Geddis. “NASA’s technology in the walker’s harness gave me the stability to do squats and knee raises I could never do before.”

Physical therapists at Kindred Hospital of Greensboro, N.C., have discovered yet another use for the technology. “We use SAM with bariatric patients – individuals who are remarkably overweight,” said Mark Castleberry, Director of Rehabilitation Services. “We have two SAMs, and are currently using one to aid a gentleman who is over 600 pounds.

Castleberry explained that, “bariatric patients in long-term acute facilities like ours are bedridden and have not used their legs for quite some time. Their legs cannot support their body weight.” Using SAM reduces the pressure on the legs, and allows them a chance for increased exercise until they are strong enough to stand on their own. “SAM helps us to help them strengthen their whole lower body. The technology has a lot of promise,” said Castleberry.

The SAM walker at Walter Reed was donated by The Henry M. Jackson Foundation for the Advancement of Military Medicine. The Foundation is a nonprofit organization providing a resource link between military medicine organizations and private industry. “It’s very important to NASA to facilitate licensing of our technologies when possible for the benefit of the broader community,” said Nona Minnifield Cheeks, chief of Goddard’s Office of Technology Transfer in Greenbelt, Md. “Our research and technology can and does often have useful applications beyond space-based exploration. We enjoy knowing that as a byproduct of our work, we directly help people right here on Earth to improve their quality of life.”

For more information about NASA’s Office of Technology Transfer on the Web, visit the Goddard Tech Transfer Office.

Facebook
Twitter
Email
Mix
Digg
Previous article
New Research On Spinal Cord Injury Funded By Speeding Fines
Next article
Inside Out | Grateful for an infection? In a way, yes