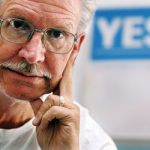 Don Reed, a tireless proponent for stem cell research, is on a quest to see his son walk again

Among them was a 61-year-old retired deep-sea diver, schoolteacher and bodybuilder from Fremont.

After a while, the man raised his hand.

“I’m thinking about Babe Ruth,” he began. “And how before he hit a home run, he would point to the bleachers.”

He straightened his wire-framed glasses and continued.

“If we get just one home run, never again would this research be questioned,” he said.

Reed, co-founder of the grass-roots group Californians for Cures, has been instrumental in passing the state’s most important stem cell legislation.

He logged hundreds of hours gathering signatures for Proposition 71, the 2004 ballot initiative that created the state’s landmark stem cell agency, the California Institute for Regenerative Medicine. And he’s advised and led grassroots efforts across the country in opposition to federal restrictions on embryonic stem cell research.

“People don’t realize we are winning an incredible victory in the face of tremendous opposition,” Reed said in typical earnestness recently at his spacious home on a quiet street in Fremont.

That victory may seem slow in coming.

Last week, President Bush issued his first veto in his 5½ years in office, rejecting a bill that would have overturned his 2001 order restricting federal funding of embryonic stem cell research.

And until Thursday, when Gov. Arnold Schwarzenegger ordered a $150 million loan to California’s stem cell agency, it looked like the agency’s mission to issue $3 billion over 10 years to California scientists would be held up by a protracted legal challenge. The political winds blowing around him don’t dissuade Reed from his mission.

It’s a mission fueled by an unwavering dream: To see his son walk again.

Roman Reed was paralyzed in a football game Sept. 10, 1994. Then 19, he was playing for Chabot College and found himself sandwiched between other players in a tackle. His parents were watching from the stands.

“I’ve never heard a sound like that before or since,” Don Reed said. “It was like an ax breaking on a hammer.”

Reed and his wife, Gloria, rushed to their son’s side on the field.
‘I don’t feel anything’

Doctors told the family that Roman was a quadriplegic. They said he would never be independent, never father a child, never work and never walk again.

But Roman has done all of the above — except walk. He is a commissioner for health and recreation for the city of Fremont, a husband and father of two sons, Roman Jr., 8, and Jason, 2.

At the time of the injury, in the face of so much bad news, Don Reed went immediately to work.

He secured an experimental steroid drug that reportedly helped New York Jets defensive lineman Dennis Byrd recover from a spinal cord injury in 2001. He battled his insurance company, which only covered 37 days of Physical Therapy. Ultimately, the Reeds paid for seven months of physical therapy out of pocket for their son, putting them deep in debt.

After seven months of therapy, Roman regained control of his triceps, which allowed him more mobility and independence, because he was able to transfer himself from his bed to his chair. He has since regained more function and independence.

“When your child is at stake, you do everything you can think of to help,” Reed said.

Reed attended a scientific conference on the subject. It was an experience that reminded him of a classic Gary Larson “Far Side” cartoon depicting a man scolding his dog and all the dog can understand is her name. In those first meetings, all Reed could understand through the scientific jargon was “stem cells,” he said.

But he thought this branch of science held promise for his son.

“Roman’s Law” was the first state-funded embryonic stem cell research program in the nation, and during the past five years has attracted $31 million in matching grants from out of state.

Last year, the California Legislature renewed the act for five years by unanimous vote. The grants are administered by the Reeve-Irvine Research Center at the University of California, Irvine, one of the nation’s premier spinal cord injury research centers.

Reed didn’t know the finer points of medical research, but he’s always been a self-starter. He was born in Berkeley and grew up in the East Bay. As a young man, he worked as a reporter for a year at the Fremont News Register, now the Argus, writing general assignment and entertainment stories.

He went into the Army, and then got into weight-lifting, bumping a few times into Arnold Schwarzenegger, then a bodybuilding superstar.

Reed learned to scuba dive in Oakland and worked as a professional diver at Marine World for 16 years. He wrote five books on diving and marine life, including “Notes from an Underwater Zoo” and “The Dolphins and Me.”

On the advice of his wife, Gloria, Reed began taking teacher training classes. He left Marine World and took a position teaching English at Horner Junior High School in Fremont, where he worked for 16 years before retiring in 2003.
A tireless campaign

It was at that moment that the campaign for Proposition 71 was heating up, and Reed jumped straight into retirement with zeal. He stood on street corners, asking people to sign the petition to get the measure on the November 2004 ballot. He wrote hundreds of letters in support of the proposition.

Robert Klein, a Palo Alto real estate developer, architect of Proposition 71 and now chairman of the committee that oversees the California Institute for Regenerative Medicine, recalled meeting Reed during the campaign.

“If you’re a father, you live every day with this,” Klein said. Klein’s son has type 1 diabetes, which spurred his own activism in stem cell research. “To potentially see his son recover, it’s powerful, continuing passionate motivation for him.”

Klein has faced intense criticism from detractors who say that he wields too much power over a state-funded agency, and that he over-hyped the promise of stem cell research to voters during the Proposition 71 campaign.

Reed has been Klein’s most vocal defendant throughout.

“It’s hard for me to see all this trash talk about him,” Reed said. “His contribution is just too big.”

Some scientists worry that patient advocates such as Reed are expecting too much.

“There are whole areas of basic science we need to understand,” said Dr. Allen Spiegel, dean of the Albert Einstein College of Medicine in the Bronx, New York, and former director of the National Institute of Diabetes and Digestive and Kidney Diseases. “That makes patient advocates nervous that we won’t get to the clinic.”

What about Reed’s suggestion to hit stem cell research out of the ballpark?

Scientists said they need to do a better job of managing expectations.

“Every new technology comes on the scene with high expectations and then there is a crash,” said Dr. Stephen Sherwin, chairman and CEO of Cell Genesys, a South San Francisco-based company focused on cancer research. “Particularly hard hit are the patients.”

Undaunted, Reed said has a lot to be optimistic about. Hans Keirstead, co-director of the Reeve-Irvine Research Center, in collaboration with Menlo Park-based Geron Corp., seeks FDA approval to start clinical trials in humans early next year for a spinal

Video footage of Keirstead’s paralyzed rats walking after being injected with the stem cell treatment got widespread attention during the Proposition 71 campaign, and helped persuade voters that cures were right around the corner.

Reed held one of those rats in his hand — an experience, he says, that helps him keep going with his advocacy work.

And he recalls his interactions with the late Christopher and Dana Reeve, whom he and Roman met at UC Irvine. Christopher Reeve promised Roman that one day they would get out of their wheelchairs and walk away, Reed said.

Last month, researchers at the John Hopkins University School of Medicine in Baltimore announced that they restored Motor function in the legs of paralyzed rats using embryonic stem cells.

Douglas Kerr, lead researcher, extracted cells from rat embryos and then grew them into motor neurons, which carry impulses from the brain and spinal cord to receptors in the muscles. The transplanted neurons allowed the rats, even those with long-term injuries, to bear weight on their damaged legs and take steps.

“All I want is for this research to go forward,” Reed said. “Imagine my son lying there and the doctors say you have no chance. And along comes someone like Hans Keirstead who says, ‘Maybe you do.'”

These days, Reed puts in about 100 hours a week on his stem cell activism, mostly from his book-lined upstairs office at his Fremont home. He typically works all day, then wakes up at 1 a.m. to log a few more hours of letter-writing, e-mailing and updating his blog. He criss-crosses the state in his blue VW Bug, plastered with pro-stem cell stickers, to attend conferences and hearings.

Aside from a small stipend from a national stem cell advocacy group, Reed works for free.

In June, Reed was presented with an award from Stanford University and the Genetics Policy Institute for his patient advocacy work.
The personal price

Reed’s relentless schedule does have a price. Gloria, his wife of 37 years, would like her husband to slow down.

“I pretty much lost my husband to this,” she said, standing in the couple’s sunlit kitchen.

Gloria said she would rather spend her time traveling the world and enjoying retirement together, spending time with their two children (they also have a grown daughter who lives in Fresno) and three grandchildren. “I’d like to see him relax,” she said. “I think he’s too involved.”

The couple agreed to take a cruise to Alaska in August — their first vacation together in a number of years. But Don would only spare seven days instead of the 10-day trip his wife wanted. “He won’t go until he gets a laptop,” Gloria said in exasperation.

Don looked sheepishly at his wife.

He thought for a moment.

“I know I will see my son walk again,” he said, getting back to his mission. “I have to see what can’t be seen.”