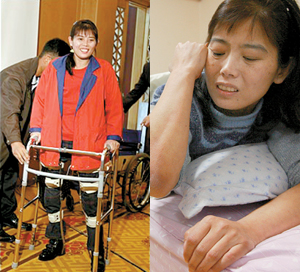 KOREA – Hwang Mi-sun, 39, was once hailed as proof that miracle cures can happen. Paralyzed from the waist down and confined to a wheelchair because of a spinal cord injury she suffered when she was 19, she met the press on Nov. 25, 2004, and took a few steps with the aid of a walker.

The press conference was called by a team of researchers at Chosun University’s medical school, Seoul National University’s veterinary college and Seoul Cord Bank, a Biotechnology company, who had treated Ms. Hwang with injections of adult stem cells.

Just over a year later, Ms. Hwang says her miracle has turned into a nightmare. She can no longer even sit in a wheelchair and now spends most of her time in bed and says she is in constant pain. Her story, and others like it, suggests that there was a headlong rush by the government and medical researchers to get a step ahead of the rest of the world in stem cell therapy and that corners were cut, including by the government’s medical oversight body.

“The improvements after the first treatment disappeared quickly,” Ms. Hwang said. “I underwent another treatment, and this is the result. I was unable to move and suffered from extreme pain, but the hospital and the company just told me to wait.”

Her doctor says she contracted an infection during the second round of therapy, last April, and that the infection has weakened her spine. The tissues surrounding the bones have hardened, her physician said, and he cannot even insert a needle in an attempt to treat her. The researchers who conducted that second round of therapy say they do not know whether the infection was caused by bacteria accompanying the stem cells or by problems related to the procedure.

One of the doctor who performed the second treatment, and who demanded that his name not be used, admitted that the operation had been risky. “It was difficult to expect a good result from her, but we performed the procedure at Seoul Cord Bank’s request. I am sorry that I did not turn it down at the time,” he said. “I wanted to treat Ms. Hwang for the side effects, but she changed hospitals, saying she could not trust us anymore.”

Citing her suffering, Ms. Hwang’s husband warned other people not to harbor too many hopes about stem cell treatment.

There is no proof of the effectiveness of adult stem cell therapy for any disease or condition, and that therapy is in the early stages of clinical trials. There are no drugs available for therapy with embryonic stem cells.

Clinical trials normally require safety tests and the submission of treatment plans to the Korea Food and Drug Administration. Ms. Hwang bypassed those procedures. Until about a year and a half ago, that could only have been done under exceptions made for patients in critical condition who could be treated by no other means.

But after the stem cell research of Hwang Woo-suk amazed the world, the authorities relaxed the rule. Since July 2004, experimental treatments with few controls are allowed if no other treatment is available, without regard to the patient’s physical condition.

After the Roh administration relaxed those rules, researchers responded quickly. In 2003, no treatment regimes were reported under those emergency procedures; in the second half of 2004, after the rules were relaxed, there were 31 such reports. The number ballooned to 118 in 2005, including 10 non-Koreans.

The JoongAng Ilbo surveyed the aftermath of 73 experimental treatments conducted under those relaxed procedures and involving adult stem cell therapy. More than 80 percent of the patients developed serious side effects, and 12 people died.

The food and drug agency’s rules say that the physicians conducting the trials are responsible for any harm that is caused by the treatments, a rule that observers say is ludicrous. Physicians require that patients sign consent forms, of course, as a condition for being treated; those forms say that patients must be willing to accept the risk of side effects of the treatment.

The problem, some experts say, is that researchers are relying on the high hopes, however unrealistic, of sufferers grasping at straws.

“At the moment, emergency clinical trials of stem cell treatments are abused by researchers and companies in the majority of cases,” said Kim Ok-joo, medical ethics professor at Seoul National University’s College of Medicine. “For their gain, they take advantage of patients’ hopes. The nation needs ethical and legal frameworks for stem cell therapy. The nation needs to be awakened from the Hwang Woo-suk myth.”

Lee Won-jong, a 29-year-old Paraplegic, said he had consulted with a clinic that performs emergency clinical application of stem cell therapy. The doctor encouraged him to undergo the operation, but Mr. Lee said he decided to pass up the chance after communicating with another person who had undergone the same treatment at the same hospital.

The second person, whom Mr. Lee contacted through an Internet site, told him that the treatment had had no effect at all.

“The effectiveness and other details of clinical trials of adult stem cell therapy should be made public,” Mr. Lee said.

In many cases, patients paid for the therapy. Jeong Seong-geun, who suffers from Lou Gehrig’s disease, said he had been forced to abandon thoughts of being treated because a stem cell therapy provider had asked him for 33 million won ($33,600) for a single treatment.

While trials of investigational drugs are normally free, the emergency clinical trials of stem cell treatments here are generally done at the patient’s expense. That, perhaps, is another sign of the avid hopes that are part of Hwang Woo-suk’s legacy.

Thirty-six of the 73 cases examined by the JoongAng Daily were treatments paid for by patients; the fees ranged from 3 million to 33 million won. The hospitals involved refused to provide information on eight cases.

Koreans are even taking their hopes abroad. Clinical trials of adult stem cell therapy have created a new business in China, where a clinic in Shandong operated with a Korean-owned bioengineering company has treated 40 patients from this country since April.

The two-week treatment costs 20 million won; the clinic has not received any approval for its trial treatments from either government, its director said.

One man’s quest to walk again