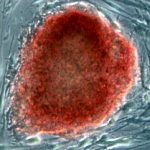 Canadian researchers have found what could be a new way to make embryonic-like stem cells, a discovery that could lead to cures for devastating conditions such as spinal cord injury and Parkinson’s disease.

Previous methods to create embryonic-like stem cells have used a virus to help transform adult cells into pluripotent stem cells — cells that can develop into most other cell types. But those methods carried the risk of damaging the cell’s DNA. With damaged DNA, the cells often became cancerous or led to abnormalities.

This new method, described online in the journal Nature, uses a novel “wrapping” procedure to deliver specific genes to adult cells to reprogram them into stem cells, without damaging the cell’s DNA.

Genetic researchers have long believed that stem cells could be the ticket to finding cures for a host of diseases, since they allow tissue to rebuild itself. The best stem cells come from embryos, which are rich in pluripotent stem cells. But the use of embryonic stem cells has been controversial.

This new simplified method does not require embryos and instead can generate stem cells from many adult tissues, including a patient’s own skin cells, allowing for personalized therapies.

It uses a DNA sequence, called a transposon, that can move around within the genome of a cell to extract the cell’s DNA and transform it into a stem cell. When it’s done the DNA leaves the cell, leaving no trace of itself in the way that viruses sometimes did.

The transposon that seemed to work best is called piggyBac, which has been in use since the 1980s to genetically modify a range of organisms.

In this latest research, Dr. Andras Nagy, from the Samuel Lunenfeld Research Institute of Mount Sinai Hospital in Toronto, was able to use the piggyBac transposon to create lines of pluripotent stem cells in mouse and then human cells.

Nagy was able to make the breakthrough only after he joined forces with a team led by Dr. Keisuke Kaji from the Medical Research Council (MRC) Centre for Regenerative Medicine, at the University of Edinburgh.

Dr Kaji had found a non-viral method to deliver four genes in a single fragment into a cell genome. However, he couldn’t figure out how to remove all trace of reprogramming from the genome.

Dr Nagy’s group, meanwhile, had developed a system that allowed the removal of inserted genes without leaving a “footprint,” but couldn’t figure out how to deliver four genes into the same part of the genome.

The teams’ breakthrough came when they combined their methods.

The research could transform stem cell technology and accelerate work in regenerative medicine, the field of research focused on finding ways for the human body to repair or replace its own damaged or diseased cells and tissues, says Dr. Jim Woodgett, Director of Research for the Samuel Lunenfeld Institute.

“What’s critical about this work is that it makes it much, much easier for labs around the world to create these special cells and it will accelerate discovery,” Woodgett told CTV Newsnet.

Dr.Michael Rudnicki of the Stem Cell Network of Canada finds the discovery fascinating and exciting.

“We now have the technology to derive these cells readily and in a way that will facilitate their use clinically,” he said. “This is an important finding and is really a breakthrough.”

Rudnicki says because the previous viral-based method caused genetic alterations that predisposed the cells to becoming cancerous, many of those cells couldn’t be used. With this technique, the cells are undamaged and as good as the stem cells in our body.

“This discovery is going to be widely used,” Rudnicki says. “I think it will prove to be the routine method used internationally.”

Woodgett believes that within about five years, researchers will be able to use stem cells generated with this new method to research ways of treating kidney disease, heart disease and joint diseases, among others.

“Really, the potential applications are endless. That’s why there is so much effort going into this field at this time.”